Recently we have had a spate of incidents where countries have removed incumbent leaders in often violent circumstances. The Ivory Coast, Egypt, Tunisia and now Libya; the images are graphic, leaders in cages being judged by the Courts, leaders being dragged out of their hiding places and manhandled by troops and citizens and finally the graphic images coming out of Libya. 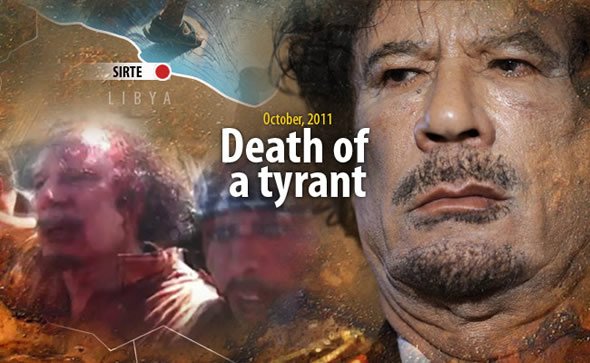 I do not think that this is the way to change governing authorities but one has to sympathise with the people of these countries who have lived under repressive and authoritarian regimes for many decades. Perhaps, many would say, they had little alternative, they had tried persuasion, appeals and campaigns to no avail. There is little doubt that the Libyan authorities would have used brutal force to hang onto power had they not faced overwhelming military opposition.

But it is not just the manner of them going that is at issue here, it is the legacies they left behind. Broken, divided, impoverished countries with weak institutions and little or no systems to hold leadership of any sort accountable. Do not for one minute imagine it is going to be easy to replace these repressive regimes with new, more accountable and democratic ones.

But it goes beyond just the broader issues of governance; it also involves financial questions, often on a scale that is almost unimaginable. Mobutu in the Congo used the Reserve Bank as his private bank and siphoned off from his desperately poor and broken country (up to 10 million people have died in the Congo over the past decade from conflict, hunger, poverty and preventable diseases) an estimated $5 000 000 000 into bank accounts around the world. It was a sum that was equal to the National Debt of the Congo and only $350 million has been discovered and recovered.

But by all accounts, the leadership of Libya, a small country on the Mediterranean that is mostly desert with oil under its sands, accrued the astonishing sum of an estimated $100 000 000 000. I show the noughts because you only understand what sums we are talking about when you see them like this. Link this to the life styles of the elite in these regimes, the luxury homes, the aircraft, the cars and other symbols of power and influence. You get a glimpse into what life has been like for these tyrants over the past decades.

There are plenty of examples of regimes where such looting of State resources is continuing – in Angola it is estimated that the elite there steal a third of all oil revenues – amounting to several billion dollars a year. Recently the daughter of the State President of Angola came to Harare and was wined and dined. She controls a massive business empire built on the capital of these funds purloined at the expense of the people.

But the main thing that astounds me is the almost complete absence of any morality or accountability, even sense of public service, in these regimes. It is all about wealth and power and if they have to stamp on the rights and even the basic welfare of their people to get there, they will go to almost any extreme to maintain their positions.

What good was all that accumulated wealth to the leadership in Libya last week? Stripped naked, shot and dragged through the streets, not a shred of dignity or respect and little prospect of anything beyond a hard pallet in a refrigerated container in the desert.

I am sure there was little sleep in certain quarters in Harare that night. The regime here started out with such promise and hope. They had fought a long war to get control of the State, finally it was theirs. The struggle totems had been many – I recall a reply by Ndabaningi Sithole to a question from an elderly pastor “What does a boy need to become the pilot of an aircraft?”, he replied with one word and it cut through that meeting like a sword “Mdara, Independence!” The struggle was for democratic values – “one man one vote”, for “Freedom”, “Equality”, “Justice”.

The young men and women who so willingly gave up their lives and education, even jobs and marriage, to enter the struggle were taught that theirs was a just fight against injustice. That the society they would build from the ashes of Rhodesia would be one characterised by a decent standard of life with real freedom and opportunity. No longer would they be simply vassals in the service of white masters. Black would be both beautiful and powerful and their sacrifices would transform the lives of millions.

The espoused ideologies were those of the socialist republics in the Northern Hemisphere. The horses of democracy and socialism were to be used to drag Africa towards a new world order. It was heady stuff.

32 years later, the dream is replaced by a nightmare. The regime brought to power in 1980 still hangs onto power and privilege, claiming they “deserve” it all because they sacrificed to bring change. The country is derelict, burnt by runaway wild fires that simply rage unrestrained, Orchards of fruit trees are dead and we import 70 per cent of the food we eat. Our savings from a century of hard work and investment and enterprise have been wiped out and our elderly are almost all destitute. Death rates are the highest in the world and our life expectancy one of the lowest.

But perhaps the saddest aspect for those who struggled to bring about Zimbabwe in 1980, is the almost total absence of any sense of accountability and morality in the leadership of the former ruling Party. Up to the end of their total control of the country in February 2009, they were stealing billions of dollars from the people of Zimbabwe each year.

Through the Reserve Bank they were taking 35 per cent of all export proceeds, from NSSA they were taking millions subscribed by workers from their hard earnings. They were stealing from every State enterprise and especially those involved in trade like NOCZIM. The evidence of the wealth created by the corruption is everywhere. In a country where it was impossible to buy bread, we had a weekly flight by the National Airline to Dubai which was in essence a shopping trip for the elite.

Now we have Chiadzwa – a diamond discovery that is quite extraordinary. Millions of carats of diamonds are being mined and exported with nearly all the proceeds being siphoned off into private accounts and lavish lifestyles. A criminal mafia runs the field protected by the armed forces and for the benefit of political and military elites.

The example next door of Botswana where massive diamond mines are operated transparently and accountably with 70 per cent of the total proceeds going  to the State coffers. Education and health services are free. Income tax is not levied and political leaders live modestly, is simply ignored.

It is no wonder that the people who suffer under such regimes take it out on the elite when the opportunity presents itself. In many ways they deserve everything that comes to them and perhaps it is a good thing that many in this sad, fallen country of ours, cannot sleep too well at night.

Preview of Tsvangirai book: At the Deep End