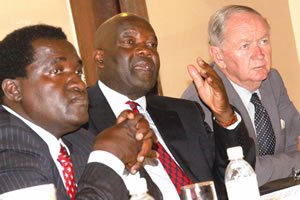 Consultations for the 2012 National Budget have begun, with participants generally calling for increased social spending. This particularly relates to the need for equitable job creation, and improvement in wages.

Zimbabwe Federation of Trade Unions chairman Mr Ephraim Tsvaringe made proposals which included the availability of loans to industry at accessible rates. He also called for increased beneficiation in the mining sector, issuance of bonds at competitive rates and the review of civil servants’ salaries. Mr Tsvaringe also called for an increase in the tax-free threshold to US$400.

“We are not looking for the 2012 budget to be doubled or even tripled, but rather for equity in whatever is allocated in terms of the male-female dichotomy,” said a representative of a gender empowerment organisation.

Speaking on the sidelines of the consultation meeting, the chairperson of the Parliamentary Portfolio Committee on Budget, Finance and Investment Promotion, Mr Paddy Zhanda said there had been many calls for increased funding for youth and gender equality programmes.

“Generally, we have noted that women and youth organisations are calling for improved funding for their projects,” he said.
Other participants urged the Government to ensure there was adequate funding for research and development, critical elements in boosting economic growth.

The chamber is also lobbying for Government re-capitalisation of the National Railways of Zimbabwe for critical infrastructure refurbishment.
“We believe investment into key infrastructure such as railways lies squarely with the Government,” he said. “However, we also appreciate the role that can be played by public-private partnerships (PPPs) and Build, Operate and Transfer (BOTs).”

It was apparent, however, that some of the submissions being made by participants would most likely put pressure on the 2012 national budget, notwithstanding a constrained fiscus in view of anticipated revenue collections for the year of around US$2,7 billion. The consultations are expected for the rest of this week across the country.

War vets in dock over kidnap

Stakeholders have been urged to participate meaningfully in the 2012 budget formulation process.

Who will win the premiership title in Zimbabwe?

War vets in dock over kidnap