HARARE – President Robert Mugabe, whom African leaders and members of his inner Zanu PF circle want out, is afraid of being hanged if he leaves office, leaked United States diplomatic cables have sensationally revealed. 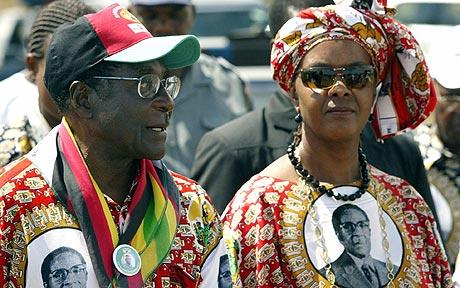 According to documents released by WikiLeaks last week, politburo member and serial political flip-flopper Jonathan Moyo told the then US ambassador Christopher Dell on March 30, 2007 that Zimbabwe had human rights conscious people who would like to “see Mugabe pay for his excesses.”

Also, Moyo is quoted in a 2005 cable as saying Mugabe was now “destructive” to the nation and should resign. According to the 2007 cable, Moyo said Mugabe had confessed his deepest fear to his close ally, Defence minister Emmerson Mnangagwa. The cable does not make it clear if Moyo received this information from Mnangagwa.

In the meeting with Dell, Moyo said the ailing 87-year-old leader was aware of his diminishing support but that Zanu PF lacked the capacity to effectively deal with the issue of succession.

Moyo has been in and out of Zanu PF, tried to form his own organisations to get into power and more recently, called on leadership renewal in Zanu PF saying there is a Generation 40 group that was ready to take over power.

In other cables, Moyo describes the former ruling party as an ideological shell which he said was led by a man who was courageous in his youth but destructive in his old age.

Moyo is quoted as saying: “Mugabe’s bombast was entertaining but only hurt the country’s national interest.”

“He urged the president to preserve his legacy by resigning immediately, thus opening the way for a presidential election within 90 days in accordance with the existing constitution,” the US officials said.

In a cable dated July 20, 2005, Moyo said the political conditions were conducive for a “Third Force” which would be instrumental in dethroning Mugabe arguing the MDC were not up to the task. He was speaking to visiting congressional senior staff Greg Simpkins and Pearl Alice Marsh.

He told them: “The key to a healthier politic dynamic was Mugabe’s removal from the scene,” Moyo is said to have told the officials.

Moyo told them that Mugabe was “on his way out” because of his failing health and the increasing number of people within his party that wanted him out but did not have mechanisms to boot him out.

He said the unresolved succession issue within the former ruling party had cascaded down to government thereby preventing meaningful development.

“Within the GOZ, it manifested itself in the deference of all to the president, an absence of meaningful debate, and institutional paralysis. This leaves everyone beholden to state house and impelled rent seeking behaviour at the expense of any national interest,” Moyo is quoted as having said.

The professor, who went about giving advice to the Americans on how to infiltrate Zanu PF and remove Mugabe from power, accused his party of having ulterior motives when they called for harmonised elections in 2008.

“Moyo asserted that Zanu PF’s constitutional plans were critical to the clique’s quest to remain on top. First, it wanted to consolidate presidential and parliamentary elections as an excuse to defer the next national contest until 2010, giving them time to reverse their unpopularity,” a US official was quoted as having said about the meeting with the erstwhile Moyo.

Moyo, who once said Mugabe was so unpopular that he could lose to a donkey in an election, is also quoted as saying the land reform programme almost brought the country’s economy on its knees.

“The creation of a senate and streamlining of land reform would expand patronage opportunities. Most importantly, presidential succession provisions would be amended to require a vice-president to complete an unfinished presidential term instead of convoking a national election within 90 days of a president’s resignation or incapacity.

“This would allow Joice Mujuru to run for election in 2010 as incumbent president. Moyo concluded that if Zanu PF managed to engineer a succession on its own terms, the struggle to restore democracy would be significantly restored,” Moyo is quoted as having said in the US cables.

“The Zezuru clique’s extra-legal putsch provoked a strong counter-effort (the Tsholotsho movement), which was suppressed out of fear of a Karanga-Ndebele-Manyika alliance,” Moyo told the congressional officers. Daily News

‘Stop harassing me, I have blood pressure’, Gwaradzimba tells Wadyajena