Fire engine with no water for Mujuru farm fire

Zimbabwe was rocked to the core this week by the death of the Commander of the Defence Forces, retired General Solomon Mujuru, in a fire at a farm in Beatrice. 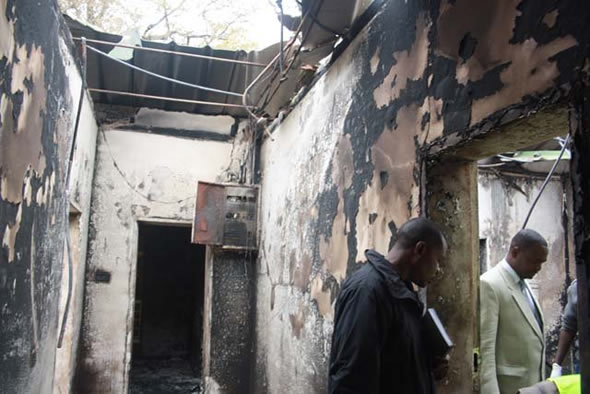 THE fire that claimed the life of Retired General Solomon Mujuru.

General Mujuru’s body was burnt beyond recognition in the early hours of Tuesday 16th August 2011. General Mujuru was the husband of Zimbabwe’s Vice President Joice Mujuru.

Everything about the fire at Alamein farm has left Zimbabweans whispering and suspicious. The morning after the fire a journalist who arrived early on the scene said the fire brigade had been called but didn’t arrive for some hours and when it did get there, had no water.

The journalist said the borehole also wasn’t working and water was being pumped into a bowser from a dam 3 kilometres away. A radio communication system on the farm was apparently out of order and the three policemen stationed just 50 metres from the house were not aware of the fire until the blaze was so intense that asbestos roof sheets began exploding and shattering.

One newspaper reported that guards at the farm did not have air time for their cell phones to call for help; another newspaper said that that farm workers had used their mobile phones to contact Vice President, Mrs Mujuru and summon the fire brigade.

No one can understand why General Mujuru, who was a big, strong man, was not able to escape from the inferno as there were numerous doors and windows, none of which had burglar bars.

The Beatrice farm, Alamein, was taken over by General Mujuru who evicted the owner, Guy Watson Smith in 2001. Given just an hour’s notice to vacate his home and farm, Guy Watson Smith said he left with just a suitcase, forced to abandon his life’s work and assets.

Guy Watson Smith told the press this week that he has spent the last ten years trying, through the High Court of Zimbabwe, to get payment for his assets that were seized. These included: 460 breeding cows; tractors, irrigation equipment, fertilizer, diesel; coal and vehicles which were valued in the region of two million US dollars.

“there were more doors and windows than holes in a colander. Our main bedroom alone had 3 doors out of it and 4 double windows. How do you get trapped inside that?”

The banner headline on the front of the Zimbabwe Independent newspaper at the end of the week summed up the feeling prevailing everywhere:

As I write this letter, General Mujuru is being laid to rest at Heroes Acre in Harare. There are more people gathered than I can ever remember seeing there. The stands and grounds are overflowing; people are seated under, around and in the branches of the surrounding Musasa trees whose leaves are red and orange in an early spring flush.

The MC at the funeral is Kembo Mohadi and his words perhaps explain far better than I can, the current sentiment in the country. He said:

“Before I call on His Excellency President Mugabe to speak may I implore you all to exercise maximum discipline.”

Until next week, thanks for reading, love Cathy Buckle

Boy in sex with chickens, cows and goats