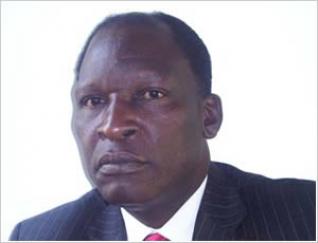 Professor Eliphas Mukonoweshuro, the Minister of Public Service and a senior MDC-T member has died.  He died early this morning at a hospital in South Africa after a short illness.

Prof Mukonoweshuro was appointed the Minister of Public Service by Prime Minister Morgan Tsvangirai in 2009.  He is the former secretary for international relations for the MDC-T.

A renowned academic, Prof Mukonoweshuro was elected Gutu South MP in 2008 and is a former Dean in the Faculty of Social Studies at the University of Zimbabwe. He joined the MDC in 1999 and was appointed a special advisor to MDC President Tsvangirai on political and diplomatic affairs.

Prof Mukonoweshuro is a holder of a BA, MA and PhD from Birmingham in the United Kingdom. He is survived by his wife and one son. Mourners are gathered at No 11 Woodgate, Pendenis, Mt Pleasant in Harare. Burial arrangements will be announced in due course.

Roy Bennett ‘shocked’ at being replaced

The country has lost a good man in Mukonoweshuro

Tackling alleged tribalism in the MDC-T

Roy Bennett ‘shocked’ at being replaced

The country has lost a good man in Mukonoweshuro

Tackling alleged tribalism in the MDC-T