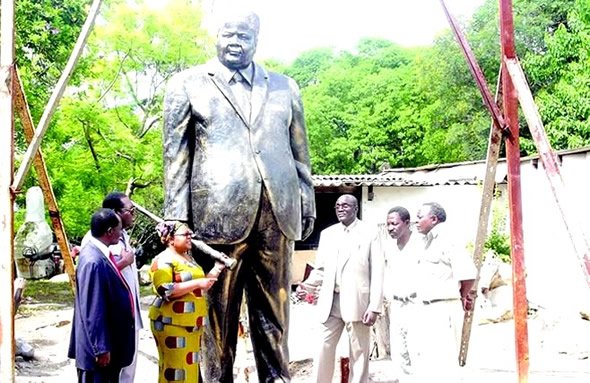 Work on the re-erection of the late Vice-President Dr Joshua Mqabuko Nkomo’s statue, which was pulled down in September last year, has resumed according to reports in the state owned media.

Dr Nkomo’s statue was pulled down before its official unveiling following strong objections by the Nkomo family and the Bulawayo community who felt the statue did not capture the exact attributes of the late Father Zimbabwe.

The family also complained that the Government did not involve them in the project. They said the statue itself was very small and pitiful, hardly a street statue at all nor the landmark and monument that it should be. The statue was then taken to the Bulawayo Museum by the National Museums and Monuments of Zimbabwe (NMMZ) where it is being kept.

However, in May this year, the Zanu-PF Politburo, recommended that the statue should be re-erected and announced that the Ministry of Home Affairs would take over the matter and resume the erection of the statues in Bulawayo and Harare. Nkomo’s family it is being reported have also given the green light to the project after ironing out the differences with the Government.

Yesterday morning at the inter-section of Main Street and 8th Avenue in Bulawayo and workers and officials from the Ministry of Public Works could be seen doing some work. The workers had already peeled off the granite finishing from the old pedestal, which is supposed to be raised before the statue is erected.

Speaking on condition of anonymity the workers said they started working on the site at the weekend. “We have resumed work on the statue. We came here on Saturday and we started peeling off the granite finishing,” said a worker.

However, an official from the ministry’s head office who also declined to be named for professional reasons said they wanted to inform the public and motorists first before starting work at the site.

“We have come to work on the site and our workers are already there. However, the only stumbling block we have is that we have not advertised in the Press that construction work would be taking place there. We are doing that right now and once we are cleared, we will start working,” said the official.

The Government had set a deadline to re-erect the statue before the Heroes Day next week but had to revise the target citing numerous logistical constraints. As for the Harare statue, Minister Mohadi recently said it was put on hold. Nkomo family spokesperson Mrs Thandiwe Nkomo-Ebrahim is also on record as saying her family was in support of the project.

She said the inclusion of the Joshua Nkomo National Foundation had brought the project to fruition adding that the foundation was not against the statue and its location.

Mrs Nkomo-Ebrahim said the family had no problems with the location of the statue at the corner of Main Street and 8th Avenue in Bulawayo but proposed that its pedestal should be raised to give it a “different effect”.

The decision to erect the two statues was taken by the Politburo in 2001 after consultations with the family. Home Affairs Co-Minister Kembo Mohadi could not be reached on his mobile for comment yesterday.

Opposition groups like ZAPU panned the “The mischievous plan to erect a statue of late ZAPU founding leader Dr Joshua Nkomo at Karigamombe Centre in Harare, a site that planned the Gukurahundi atrocities and renamed to humiliate him and ZAPU is extremely offensive and equal to a public crucifixion of Zimbabwe’s true national hero.”

According to ZAPU “The Karigamombe Centre (which means bring down the bull in chiShona) was the place where the North Korean trained 5 brigade massacres (Gukurahundi) were authored. More than 20,000 ZAPU innocent ZAPU supporters were killed in the 1980s, while women and children endured torture and rape. It is known that the former Piccadilly Centre was renamed to shame Dr Nkomo and ZAPU.

“While most Zimbabweans would like to acknowledge the heroism of the late father Zimbabwe, it is a charade to erect Nkomo’s statue on a site that planned the murder of his supporters and one that is named to his shamming. It is clear that those who persecuted and humiliated our late national leader during his life time still have burning desires to continue humiliating him, his family and all those who support him and what he stood for, even after his death.

“Any Zimbabwean who knows what Joshua Nkomo went through will agree the location of the Karigamombe Centre; in Harare is not the fitting location to dedicate for Joshua Nkomo’s mark of respect. We do not want to believe that the Harare City fathers and GNU authorities behind this plan are short of historical facts surrounding the proposed location and the history of the man.

“There is no shortage of suitable locations where his statue could be erected. We call on all the stake holders and authorities behind this unsound plan to seriously reconsider. We also call on all Zimbabweans who have respect and hold up to what Joshua Nkomo stood for to support any efforts that will result in the removal of Joshua Nkomo’s statue from Karigamombe Centre should it ever be erected there,” ZAPU Europe said in a statement .