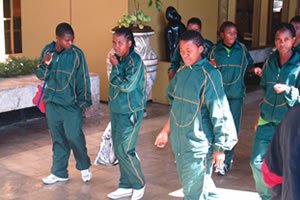 The visitors fell at the final hurdle as an 84th minute strike by Zimbabwean goal-getter Rufaro Machingura saw the Mighty Warriors crowned as the 2011 COSAFA Women’s Championship winners.

With six minutes remaining on the clock an overhead kick from striker Rudo Neshamba caused havoc in the South Africans’ penalty area and with their defence failing to clear Machingura was on hand to slot the ball home.

Concern over ZIFA Village as Mighty Warriors troop into camp

Zimbabwean coach Rosemary Mugadza, played Emmaculate Msipa ahead of Erina Jeke in the midfield at the start of the match while in defence, Danai Bhobho replaced Eunice Chibanda, who was sent off in the hosts’ semi-final win over Tanzania on Thursday.

Moxon bounces back at Meikles’ helm

Concern over ZIFA Village as Mighty Warriors troop into camp