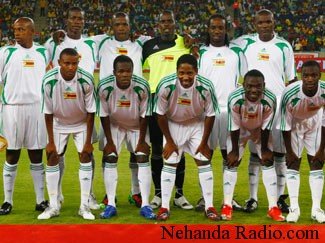 ZIMBABWE’S Warriors jumped 39 places up the table on the Fifa/Coca-Cola World Rankings for June with bullish coach Norman Mapeza yesterday saying the journey back to the top table of African football had just begun.

The Warriors, who beat Mali 2-1 in a Nations Cup qualifier during the month under review, were the best performing side of all the national teams. On the last rankings in May, Zimbabwe were ranked 126th in the world, but the Warriors have now risen to 87th place.

Zimbabwe have been making a steady rise since April when they were in 129th place. The Warriors now have 380 points and are the 22nd best team in Africa and have made their best move since the introduction of the Fifa/Coca Cola world rankings. It’s the first time since January 2009 that Zimbabwe have stormed back into the top 100 when they were ranked in 96th place.

Zimbabwe are tied on points with Benin who dropped seven places. Two goals from striker Knowledge Musona at Rufaro on June 5, saw Mapeza’s charges reviving their seemingly faltering campaign in the qualifiers. Zimbabwe had lost 1-0 to Mali in Bamako in a Group A qualifier after registering a disappointing 0-0 draw at home against Cape Verde.

Cape Verde, who lost 1-0 to Liberia in their last game, are still topping Group A but are ranked lower than Mali. Mali are ranked 78th in the world and 19th in Africa with 416 points after dropping two places. The Eagles of Mali are just a place above Cape Verde who are 20th, with 397 points, while Liberia are 32nd in Africa and 125th in Africa.

Warriors’ coach Mapeza said it was important that Zimbabwe continue with their revival. “I think we just have to win the next games so that we continue improving on the rankings. “It’s good for the nation and it’s good for everyone who is involved in our football if we are making such steady pro-gress,” said Mapeza.

“We have to play and win the next game and continue with the revival,” said Mapeza. Besides playing Liberia at home, the Warriors will travel to Cape Verde to face the Blue Sharks. “I think it’s a motivation for us that we have moved a step forward. “After the defeat to Mali, people continued working together as a unit and that is what brought us the result in the reverse fixture.

“It shows that if we work together as a team, we can achieve great things,” said Mapeza. The Warriors’ best position on the ran-kings was during the Dream Team era under the late Reinhard Fabisch when they were placed 40th in the world in April 1995. Their lowest ranking was in October 2009 at 131st place.

“I think we had the poor rankings because of those games in Asia but now is the time to work hard and improve again,” said Mapeza. Mapeza said he will sit with Zifa and plan ahead for the remaining qualifiers. “I had a meeting with Zifa but we still have to meet again after the Cosafa championship,” he said.

Zimbabwe, because of their revival, could start receiving inquiries for competitive friendlies and their next one could be against Bafana Bafana.

The South Africans were scheduled to play Nigeria but the Super Eagles pulled out, leaving Bafana Bafana in a quandary. Cote d’Ivoire, with 922 points, remain the best African team and are now 14th in the world as they climbed seven places. The Elephants have scaled new heights, reaching their best position since the introduction of the world rankings while Ghana, on 735 points, are the second best African side.

Egypt, Nigeria, South Africa, Cameroon, Algeria and Tunisia complete the top 10 slots in Africa. Among the top 10 teams in the world, only leaders Spain and closest challengers The Netherlands, have retained their positions. Brazil, third last month, have lost points and are in fifth place while England have moved into fourth behind Germany.

A total of 131 international “A” mat-ches have been played since the previous edition of the Fifa/Coca-Cola World Ranking, consisting of 61 friendlies, 22 Gold Cup matches and 48 qualifiers for confederationchampionships. This takes the total number of games played this year to 386 and focus now shifts to the Copa America for the next games.

Mugabe had lust for power: Gumbo

‘WE HAVE THE QUALITY’. . . Musona backs his Warriors to rise again