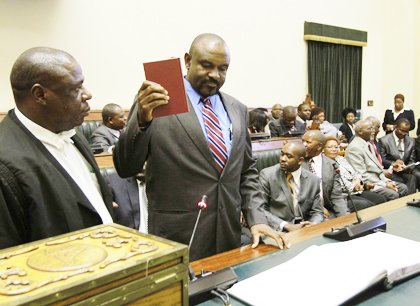 Ballot returns from Tuesday’s hotly contested Speaker of Parliament election in Harare indicate that at least two Zanu-PF legislators may have voted for the victorious MDC-T candidate Lovemore Moyo.

Lovemore Moyo polled 105 votes to 93 that went to Zanu-PF’s Simon Khaya Moyo. A total of 203 MPs were eligible to vote however owing to a Zanu PF instigated crackdown, several MDC-T MP’s were in police custody and a total 199 MP’s were present in the Parliament Building.

Of these, 96 each belonged to Zanu-PF and MDC-T and seven to the smaller faction of the MDC led by Welshman Ncube. Four MPs – two each from Zanu-PF and MDC-T – were absent. While Zanu PF’s Neddie Masukume (Mwenezi West) was hospitalised Cephas Sindi (Gokwe-Chireya) could not make it to Harare.

MDC-T MP and Energy Minister Elton Mangoma was granted bail on Tuesday over dubious corruption charges but prosecutors deliberately used a controversial law to suspend bail. Gokwe-Kabuyuni MP Costin Muguti was convicted on trumped up charges and could not vote while appealing this conviction.

With the MDC leadership having said they would vote for Lovemore Moyo, this theoretically meant 103 votes should have gone to MDC-T. However, Lovemore Moyo polled two more votes than this, indicating – in the very simplest terms – that a pair of Zanu-PF legislators voted against their own candidate.

There was also one spoilt ballot, which is believed to have been from a Zanu-PF legislator as indications were that the vote had been cast for Khaya Moyo. If all present Zanu-PF MPs had voted for the official party candidate and there had been no spoilt papers, Khaya Moyo would still have lost by 96 votes to 103 due to the alliance between MDC-T and MDC.

A Zanu-PF Politburo member on Tuesday said, “This is a show of the democracy in the party.  Yes, it’s a bitter pill to swallow but we will swallow it and ensure that such problems are dealt with before the general elections that we will have later this year.”

In the August 2008 vote that first elected Lovemore Moyo there were strong indications that about five Zanu-PF MPs voted for him. Serious infighting in Zanu PF is said to be behind the defiance by some of the MP’s. Tuesday’s result put paid to attempts by Jonathan Moyo and others to bribe legislators from the MDC-T to vote for Khaya Moyo by paying them US$5000 each.