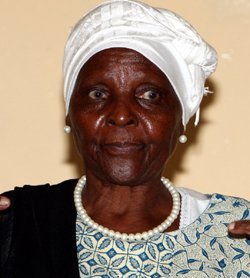 Former cabinet minister and liberation war heroine Thenjiwe Lesabe who recently defected from Zanu PF to the re-activated ZAPU has died aged 79. A spokesman for the party confirmed she died on Friday.

At the time of her death Lesabe was a member of the ZAPU council of elders. Nehanda Radio understands she died in the Intensive Care Unit at the United Bulawayo Hospitals late Friday afternoon.

Last year Lesabe alongside ZAPU leader Dumiso Dabengwa was delisted from US and European Union targeted sanctions after they quit the oppressive Zanu PF regime to re-form ZAPU.

Lesabe in the past has been Deputy Minister of Tourism before being elevated to Minister of Education, Sport and Culture. She was later appointed to the ministry of National Affairs and Employment Creation a post she held until she left Government in 2000.

Why Mugabe gave in on Tekere hero status

Why Mugabe gave in on Tekere hero status

ZAPU is a personal project for Dabengwa