The uprising in Tunisia & Lessons for Zimbabwe 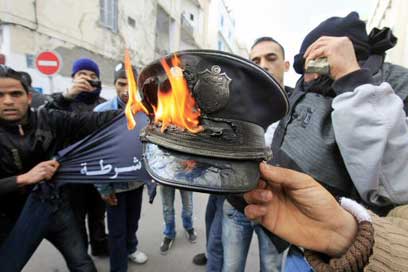 The spontaneous revolution of Tunisian people has forever changed the Arab world; it has shown that grassroots revolution can happen everywhere. What happened in Tunisia stunned and embarrassed Arab and Western countries alike.

Tunisia was not a country made of revolutionary material. President Zine El Abidine Ben Ali’s government was stable and the economy prosperous. The country had expelled Rashad Anushi and the other leaders of the Muslim Brotherhood after their party, Islamic Renewal, had obtained 17 percent of the vote in the 1987 elections.

Since then, the West had seen in Ben Ali a bulwark against radical Islam. Tourism flourished and millions of visitors sang the country’s praise. What no one wanted to see was that Ben Ali ruled with an iron fist and suffered neither legitimate opposition nor criticism. Those who tried to oppose him were jailed or left the country.

Mali and Tunisia qualify for Africa Cup of Nations

Not many people in the West noticed that it was only a very small minority that enjoyed the benefits of the economic reforms and revenues brought in by tourists. Corruption was rampant and the Ben Ali family, and that of his second wife Laila, were the principal beneficiaries.

Millions and even billions of dollars were diverted to their bank accounts in France and elsewhere. This hijacking of state funds led to inflation, and a constant rise in the price of basic necessities, followed by an increase in unemployment. Official figures put the number of jobless Tunisians at 15%, but 20% or more is probably nearer the mark. Still, the West did not react and only strengthened its bonds with Ben Ali.

Arab countries saw in Tunisia a shining example of a seemingly open regime, while it was in fact based on stifling the opposition and having security services closely monitor events on the ground.

A month ago, Mohammed Ben Aziz, a young university graduate who had not found a job and was selling vegetables to make a living in the city of Sidi Bouzid, saw a policeman destroy the makeshift booth for which he had no license and he set himself on fire.

Many other unemployed townspeople promptly launched a fierce protest, which set the whole region aflame before spreading to the rest of the country. Unrest continued to grow for a month, while world media remained mostly silent; even Arab media kept their distance.

It was generally thought that it was just another flare-up which Ben Ali would soon take care of. The world began to pay attention when similar demonstrations took off in Algeria, with many fearing a domino effect. As the situation in Algiers quieted down, perhaps temporarily, events in Tunisia became more aggravated, reaching the capital.

Once again Ben Ali brought down his iron fist; police and security services opened fire on the protesters and as many as 80 unarmed civilians were killed. Protesters grew even more determined. Then the army’s commander-in-chief announced that his troops would not intervene and the president, without stopping to reconsider, fired him.

Less than 24 hours later Ben Ali had fled, stunning many. After all, the police were still faithful to the regime and the members of the ruling party spread throughout the country were still a force to be reckoned with.

Suddenly the world was looking at a successful popular Arab revolution, one that had never happened before. There had been revolutions in the Arab world since it became independent of foreign colonial powers – the Young Officers Revolution in Egypt in 1952, revolutions in Iraq, Syria, Libya and Sudan – but they were all military coups, planned and executed by officers, even though they later said they were for the good of the people.

What happened in Tunisia was different. It was started by the people, not the leaders, and their spontaneous protest seemed to have snowballed on its own – unless evidence of a hidden hand is brought forward.

It appears to have been an authentic popular uprising, brought about by the suffering of many and the hatred of a corrupt government. It also appears that the new media – social networks, cell phones, etc. – did not play a dominant role in the events, which were there for all to see, though they did help in getting the news to the international press.

The media has found a connection between diplomatic cables recently made public by WikiLeaks pertaining to the extent of Tunisian corruption, and especially that of Ben Ali’s family, to the events. But the people knew far better than the diplomats what was going on.

Why shouldn’t a similar revolution take place in these countries? It’s hard to say, perhaps because the conditions differ greatly from country to country.

Has the revolution really won? It is hard to say. Ben Ali is gone, but his supporters and the ruling party still hold all the government positions. They are well organized and not ready to relinquish their status and riches. Armed bands still roam the streets, bringing destruction and pillage. The army is slowly gaining control but the situation is still fraught with doubt.

The caretaker government wholly comprised of Ben Ali’s men has started talking with different parties’ leaders about holding elections within 60 days. That is a long time from now.

Whatever the final outcome, the spontaneous revolution of the Tunisian people has forever changed the Arab world. They have shown that a grassroots revolution can happen everywhere. Jerusalem Post

Ellah Wakatama Allfrey Behind the Headlines

Mali and Tunisia qualify for Africa Cup of Nations