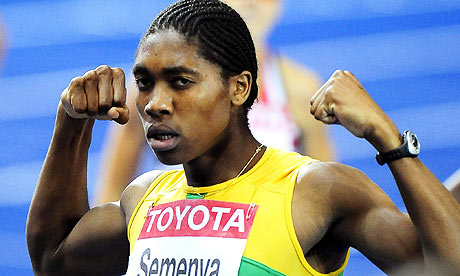 Semenya struggling to get sponsors

The Young Communist League of South Africa (uFasimba) has expressed its concern at the manner they feel South African athlete Caster Semenya has been isolated and ostracized by sponsors and various people who initially took centre stage when she was going through her gender testing ordeal.

‘The tests have cleared her name, but she now finds herself with no sponsor to further her athletics career,’ the YCLSA said in a statement seen by Nehanda Radio.com.

Semenya won gold in the women’s 800 metres at the 2009 World Championships with a time of 1:55.45 in the final. Following her victory questions were raised about whether Semenya has an intersex condition that might give her an unfair advantage over the other racers.

She was withdrawn from international competition until 6 July 2010 when the IAAF cleared her to return to competition. In 2010, British Magazine New Statesman listed Caster Semenya in the list of “The World’s 50 Most Influential Figures, 2010”.

‘We wonder if she had been white, would she have found herself in the same situation of having no sponsor,’ the YCLSA said.

‘As the YCLSA we call upon government to take the lead through the Ministry of Sports and Recreation to find sponsorship for Caster Semenya and give her financial support. Her talent and abilities speak for themselves and as South Africans we should continue to rally behind her even in her victory.

‘When the issue of the gender testing was making headlines everyone took keen interest in her life, but the same zeal and enthusiasm unfortunately has not materialized when she needs us the most, to further advance her career as a professional athlete,’ the YCLSA added.