Brazil gets rapturous welcome in Zimbabwe 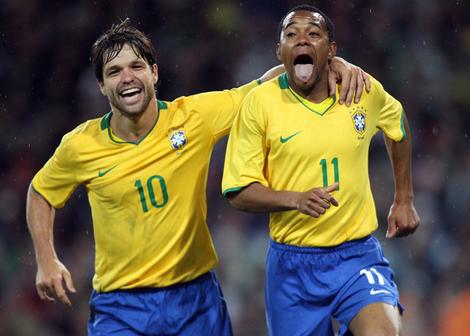 Five times football World Cup winners Brazil got a thunderous ovation from crazed Zimbabwean fans who tried to get a glimpse of the squad as they arrived in the country. With a few days before the World Cup begins in South Africa the star studded Brazilians are in Harare ahead of a friendly with the Zimbabwe national team on Wednesday.

Zimbabwean tourism officials are said to have moved mountains trying to get Brazil to play the Warriors who are ranked a lowly 110 places in the FIFA world rankings. It’s reported elsewhere the government had to cough up US$1,5 million in appearance fees to get the Brazilians over. This after most world cup finalists turned the country down owing to its shoddy human rights record.

This reporter watched as hundreds of drum beating fans mobbed Brazilian coach Dunga, Manchester City player Robinho and Real Madrid midfielder and former World Player of the Year Kaka enter a hotel. They were all under tight police security at the local hotel in Harare.

Asked about Zimbabwe, Robinho added: “We don’t know much about them, but we will respect them. We want to play with plenty of movement and to build the plays we are used to. The result is the least important thing. We want to train well. However, even though the result is not important, we don’t want to lose in any game. We will prepare well to get to the World Cup in good form.”

Striker Luis Fabiano, meanwhile, warned to take precautions in the friendly in order to avoid injuries. “Friendlies are important, but I will face them calmly,” the Sevilla star said. (Coach) Dunga has asked us to train hard, with dedication. It is a hard championship that demands a lot from players. He wants us to be well prepared.”

According to reports, Kaka is not expected to start the match on Wednesday as he is recovering from a groin strain. Meanwhile Zimbabwean defender Thomas Svesve said: “It is a wonderful opportunity for us to test ourselves against the best players in the world. We need no motivation in this game and we going all out to win against the former world champions.”