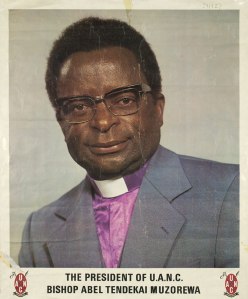 Former Zimbabwe-Rhodesia Prime Minister, Retired Bishop Abel Tendekayi Muzorewa (85) died at his Borrowdale Home in Harare on Thursday. His death comes shortly after the death of his brother, Farai David, who was living in America. Mourners are gathered at 140 The Chase, Mount Pleasant in Harare.

The controversial Muzorewa was born on the 14th of April 1925 and served as Prime Minister of Zimbabwe-Rhodesia an unrecognized state that existed from 1 June 1979 to 12 December 1979.  He only held office for a few months.

Muzorewa is the eldest of a lay preacher’s eight children and was educated at the United Methodist School near Mutare.  He was a school teacher at Mrewa between 1943 and 1947 before becoming a full time lay preacher at Mtoko between 1947 and 1949. He then studied theology.

On 3 March 1978, Muzorewa, the late Ndabaningi Sithole and other non-exiled leaders signed an agreement at Governors Lodge, Salisbury, which paved the way for the interim government, the leadership of which was an Executive Council made up of Muzorewa, Sithole and Jeremiah Chirau.

Chirau was a notable figure among Rhodesia’s chiefs, and during the Unilateral Declaration of Independence he became the only leader of the Zimbabwe United People’s Organization, a party largely comprising chiefs.

The British government asked all parties to come to London for negotiations to find a lasting solution to the liberation struggle waged by Zanu and Zapu political parties, which were based in Mozambique and Zambia. The war took place between 1964 to 1979.

Muzorewa was persuaded to accept fresh elections, to be held in early 1980. The new elections took place at the end of February 1980. Muzorewa lost the elections and clinched only three parliamentary seats out of 80. Muzorewa stood against Mugabe in the presidential election of 1995. However, once again he was resoundingly defeated.

Bishop Muzorewa was reported to have taken over a white-owned farm near the eastern border city of Mutare in January 2008 stating that: “I just wanted to have land which was taken from my forefathers without any recompense. It’s correction of injustice”.

In March of the same year , he issued a statement which commended the government’s land reforms attacked the Britain for reneging on promises made during the Lancaster House negotiations to compensate white farmers for land taken for re-distribution. Radio VOP/ New Zimbabwe/ Other Agencies

Selling Zimbabwe’s economy, at a loss