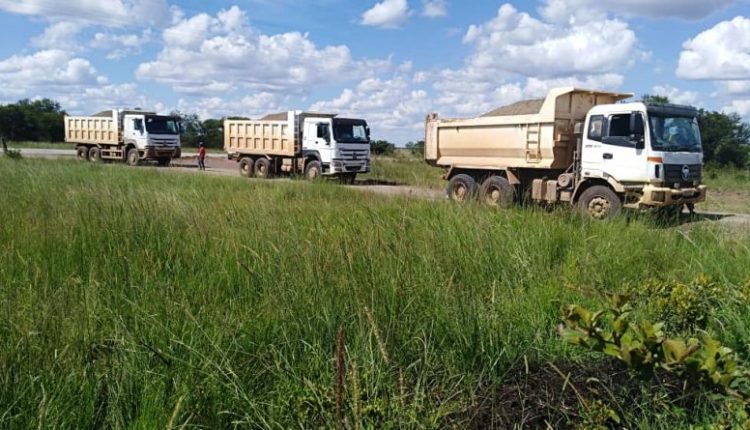 Some 40 members of Wadzanai Farm Co-operative staged a five-hour demonstration on Wednesday, singing and dancing at the gate of Xinyu Mining Company in Lalapanzi to protest against encroachment and dumping of sludge into their farm.

The demonstrators brought business to a halt at the chrome wash plant situated at Kudzerima Farm in Lalapanzi along Mvuma-Gweru road as they blocked trucks from entering the company gate between 1pm to 5pm.

A Mirror reporter was at the scene. The co-operative which comprises of 178 families has also since engaged a lawyer, Hillary Garikai of Garikai and Company who said that he was going to use a messenger of court after Xinyu officials refused to receive a letter from the co-operative.

He gave the Chinese company a five- day ultimatum to respond to the letter. Xinyu manager Jixin Zho said he bought the land from Lucas Koke. Wadzanai Farm Co-operative chairman, Okay Machisa told The Mirror that he is not going to rest until the Chinese respect the co-operative’s prop- erty rights.

He accused Xinyu of illegally extending its mining boundary into their farm, erecting structures and dumping sludge on the farm.

Xinyu management allegedly refused to receive the co-operative’s let- ter which instructed them to remove sludge accumulating on the farm, to restore the boundary fence to its original position, to pull down illegal structures erected in the farm and to stop trespassing into the co-operative’s land.

The Mirror was told that Xinyu management is insisting that it will not move out of the farm because it bought the land from one Lucas Koke for US$2 660. The co-operative is saying Koke is not even a member of the co-operative and even if he was, he had no right to sell co-operative land on his own.

The councillor of the area, Ta- pera Dzitirai dismissed the sale of the co-operative land to the Chinese as a nullity.
“I am the co-operative chair- man and there is no one who can sell land here without the knowledge of our manage- ment,” said Machisa.
“I bought this land from Koke and I have the papers. I paid US$2 600 for it so these people must talk to Lucas,” said Zhou.

The co-orperative secretary general, Dominic Mngwabi said the Chinese were damaging roads in the area with their trucks and said that they should rehabilitate them. Xinyu started mining Chrome in Lalapanzi more than five years ago and it is not in- volved in any projects to benefit the community. Masvingo Mirror