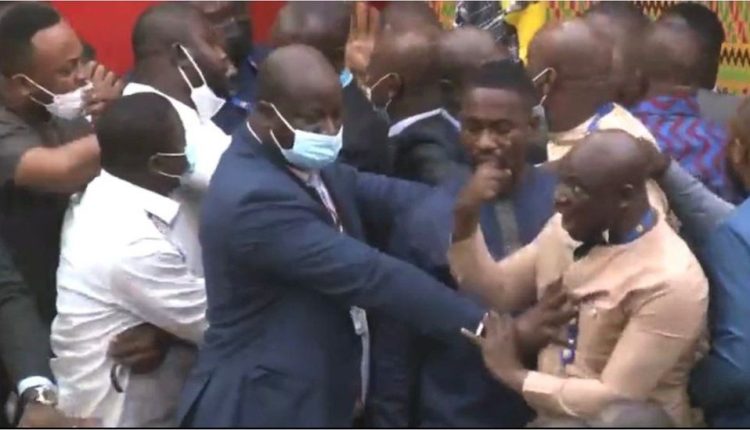 A brawl has broken out in Ghana’s parliament during a late-night session over a contentious government-proposed levy on electronic transactions.

MPs shoved, pushed and threw punches at each other, while others tried to stop the fighting.

He was chairing the session, which was then adjourned because of the disorder.

The opposition National Democratic Congress (NDC) has rejected the proposed levy of 1.75% on electronic transactions, which includes mobile-money payments.

It says it will hit low-income people and those outside the formal banking sector.

But Finance Minister Ken Ofori-Artta has said it is necessary to widen the tax net, arguing that it could raise an extra 6.9bn Ghanaian cedi ($1.15bn; £870m) next year.

The parliamentary session began on Monday morning and broke up after midnight, the local Graphic newspaper reports.

It tweeted video footage of the chaos:

Many Ghanaians have expressed disappointment at the behavior of their MPs, saying they ought to be role models – not behaving immaturely.

The deputy speaker’s vote was seen as crucial as parliament has been heavily divided over the proposed tax. He is from the governing New Patriotic Party (NPP).

The NDC said that as he was chairing the session he could not vote.

The proposed levy was approved by parliament’s finance committee by 13 votes to 12, but only after its chairman cast the decisive vote in favour of the proposal, the Graphic says.

Parliament convened again on Tuesday, but MPs did not vote on the proposed levy after agreeing to adjourn the session to January.

Ghanaian politics has been fractious since last year’s election, when the NDC and the NPP obtained 137 parliamentary seats each.

One seat is held by an independent, who has thrown his weight behind the NPP, giving it the edge.

In January, soldiers entered parliament to end a brawl among MPs over the election of a speaker – the NDC’s Alban Bagbin was elected to the post, after some NPP members voted for him rather than their party’s candidate, Mike Oquaye.

Mr Bagbin was not present during the chaotic session on Monday, leaving Mr Owusu from the NPP in the speaker’s chair.

A genocidal champion can’t be a unifier: Sikhala digs at Mnangagwa

Ghana blast: Many feared dead after huge explosion near Bogoso