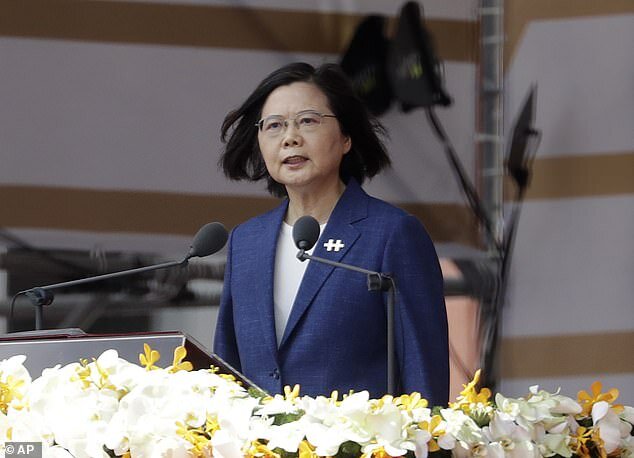 A top Taiwan security official has claimed that China has internally debated whether to attack Taiwan’s Pratas Islands after 2024, the year President Tsai Ing-wen’s term ends.

National Security Bureau Director-General Chen Ming-tong did not say how he knew that such a move had been debated or why it would not happen during the next few years.

China’s defence ministry did not immediately respond to a request for comment on Thursday.

China’s Xinjiang crackdown under scrutiny ahead of UN…

Self-governed Taiwan’s 23 million people live under the constant threat of invasion by authoritarian China, which views the island as its territory and has vowed to one day seize it, by force if necessary.

Taiwan has complained for over a year of repeated sorties by China’s air force, often in the southwestern part of its air defence zone near the Taiwan-controlled but lightly defended Pratas Islands.

Lying roughly between southern Taiwan and Hong Kong, the Pratas are seen by some security experts as vulnerable to Chinese attack due to their distance – more than 250 miles – from mainland Taiwan.

China has blamed Taiwan, and its most important international supporter the United States, for the simmering tensions across the Taiwan Strait.

‘Attacking and capturing the Pratas Islands – this scenario where war is being used to force (Taiwan into) talks – our assessment is that this will not happen during President Tsai’s tenure,’ Chen told a parliamentary meeting.

Chen was responding to a question from a lawmaker in Taiwan’s main opposition party, the Kuomintang, on whether China would attack before 2024, when Tsai’s second term is set to end.

‘Frankly speaking, they have internally debated this before,’ Chen said, referring to China but without elaborating or mentioning when such a discussion occurred. ‘We obviously have some understanding,’ he said.

Taiwan’s presidential office referred questions on the matter to the National Security Bureau, which did not immediately comment out of office hours.

One scenario Taiwan authorities fear is that China could capture the Pratas Islands in a drastic escalation of tensions that could lead to a war, officials have said previously.

Taiwan has repeatedly said it wants to maintain the status quo with China, but vows to defend its freedom and democracy.

Chen told lawmakers that while the situation is more tense than in the past, it had not reached the point of an actual attack on Taiwan. ‘In the next one, two, three years, within President Tsai’s tenure, it won’t happen,’ he said.

In Washington on Wednesday, General Mark Milley, chairman of the U.S. Joint Chiefs of Staff, said China was unlikely to try to militarily seize Taiwan in the next couple of years, even as its military develops capabilities that would enable forcibly retaking the island.

It comes as the US warned that China is rapidly expanding its nuclear arsenal and could have more than 1000 warheads by 2030.

That’s a faster buildup than U.S. officials forecast a year ago, suggesting Beijing could overtake American power by the middle of the century.

The US has declared China its principle security concern for the future, as Beijing works to build the People’s Liberation Army into ‘world-class forces’ by 2049, according to its official plan.

The People’s Republic of China (PRC) could have 700 deliverable nuclear warheads by 2027, and could top 1,000 by 2030 – an arsenal two-and-a-half times the size of what the Pentagon predicted only a year ago, according to the Pentagon report published Wednesday.

Like the United States and Russia, the two leading nuclear powers, China is building a ‘nuclear triad,’ with capabilities to deliver nuclear weapons from land-based ballistic missiles, from missiles launched from the air, and from submarines, it said.

Beijing is also ‘building the infrastructure necessary to support this major expansion of its nuclear forces,’ according to the assessment, which came in the Pentagon’s annual report to Congress on Chinese military developments.

But the report argued China was likely not seeking a capability to launch an unprovoked atomic strike on a nuclear-armed adversary – primarily the United States – but looking to deter attacks by maintaining a credible threat of nuclear retaliation.

Beijing has dismissed US fears over its military development, and on Thursday accused the Pentagon report of aiming to ‘hype up talk of the China nuclear threat.’

‘The report released by the US Department of Defense, like previous similar reports, ignores facts and is full of prejudice,’ said Chinese foreign ministry spokesman Wang Wenbin.

A year ago, the Pentagon’s China report said the country had about 200 deliverable warheads and would double that by 2030.

The developments come as China expands and upgrades its military, seeking the capability of projecting power globally, much as the United States has done for decades.

The rivalry has increased concerns about a possible US-China clash, especially over Taiwan, which is closely supported by Washington but claimed by Beijing as its territory – to be seized one day, by force if necessary.

By 2027, the latest report said, China aims to have ‘the capabilities to counter the US military in the Indo-Pacific region, and compel Taiwan’s leadership to the negotiation table on Beijing’s terms.’ The report also confirmed recent reports that in October 2020, Pentagon officials were forced to quell real concerns in Beijing that the United States, driven by domestic political tensions related to the presidential election, intended to instigate a conflict with China in the South China Sea.

‘These events highlighted the potential for misunderstanding and miscalculation, and underscored the importance of effective and timely communication,’ the report said.

It also questioned the PLA’s intent in biological research into substances that potentially have both medical and military uses.

Such concerns have mounted since Covid-19 emerged in Wuhan, central China, an area also home to a biological research lab with PLA connections.

China has denied the facility had anything to do with the Covid outbreak, but has limited access to it for investigators.

Beijing has vowed to bring fiercely democratic Taiwan, which it considers its ‘sacred territory’, under its rule and has not renounced the use of force.

The Pentagon report renewed concerns about China’s increasingly muscular military and its development of options to take Taiwan, one of several scenarios the U.S. military cautioned Beijing could pursue.

But a senior U.S. defense official, who briefed reporters, declined to speculate about whether that scenario was likely or say if they saw a near or even a medium-term risk of armed conflict between Beijing and Taipei.

On the long list of potential Taiwan scenarios outlined in the briefing, the U.S. official cited the possibility that China could work on options for everything from a joint blockade campaign against Taiwan to a full-scale amphibious invasion.

It could carry out air and missile strikes or cyber attacks. China could also potentially seize offshore islands. The official declined to say which one of these contingencies was most likely or if any were likely at all.

But the Pentagon has voiced concern about China’s pursuit of capabilities that would enable such actions.

‘They have a range of different things that they are wanting to be prepared to do,’ the official said.

Separately, the top U.S. general said on Wednesday that China was unlikely to try to militarily seize Taiwan in the next couple of years.

‘Based on my analysis of China, I don’t think that it is likely in the near future – being defined as, you know, six, 12, maybe 24 months, that kind of window,’ General Mark Milley, chairman of the Joint Chiefs of Staff, said when asked if China was preparing to make a move on Taiwan in the near future.

The Pentagon report added a section on China’s biological weapons and potential dual use, but did not look at the origins of COVID-19.

There has been increased focus on China’s chemical and biological capabilities after COVID-19 was first identified in the central Chinese city of Wuhan in late 2019.

U.S. intelligence agencies said last week that they may never be able to identify the origins of the pandemic, as they released a detailed version of their review of whether the coronavirus came from animal-to-human transmission or leaked from a lab.

China has consistently denied allegations that the virus was leaked from a specialist laboratory in Wuhan.

Mnangagwa claims Biden treats him better than US Embassy in Harare