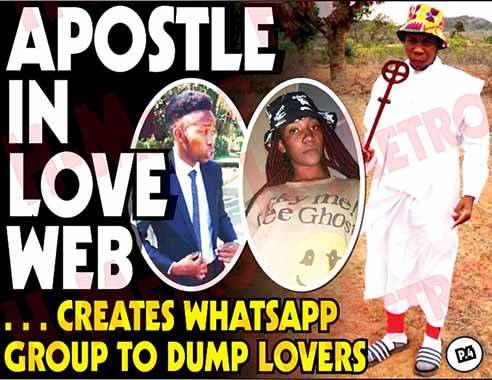 A Chiredzi based young prophet Kudakwashe Hlangana, popularly known as Apostle Joel in the prophetic sector or as Nasty Diego rockstar in the social media streets has been caught up in a love Dilemma dating many girls at the same time.

Apostle Joel who is also a son of a bishop belonging to the Holy Ministries church has a WhatsApp group chat circulating with the title, where all his girlfriends were added as he apologized to them for breaking their hearts.

In an interview with H-Metro, Apostle Joel revealed that he was looking for a girl to marry.

“It is just unfortunate that one of the girls who I was with created a group and added all the other girls.

“It was nothing serious, I was just looking for a woman to settle with.

“We all have a choice before finally marrying,” he told H-Metro.

The young apostle also dismissed the claims that the girls where from his church.

“These girls are not from church.

“I think there was a mix up.

“I was just having fun on WhatsApp, the girls took it serious.

“Otherwise it was not really something serious, ndezvekungotamba.

“They go to their own churches they are not from my church,” he said.

When asked about his reputation as a prophet altogether as a son of a Bishop, Apostle Joel later on dismissed the claims again.

“I’m not a prophet, I’m a music promoter.

“I can’t also really say I’m a son of a Bishop actually.

“This story of these girls should not really be an issue.

“They brought this story to you from their own angle because they are just hurt.

“Otherwise it was not supposed to be handled like this,” he added.

When H-Metro tried to contact Shenel Zambasira one of Kuda’s girlfriends who had created the group titled “My girlfriends”, she could not be contacted for comment.

In another interview with other of Kuda’s girlfriends who was also in the group she revealed most of the young prophet’s bad habits and traits.

“He has many girlfriends such that I’ve lost count of how many they are.

“He sleeps with them all, yet he is a prophet.

“He uses muteuro to date both classic girls and to take advantage of them.

“He manipulates them in the name of prophecy and that’s how he takes money from them.

“He breaks couple’s relationships in the name of prophecy and later takes over the girls.

“His behavior and post in the church go two different directions and I hope he does not go on breaking innocent people’s hearts and using prophecy as a tool to hold them hostage whilst destroying them,” she told H-Metro. H-Metro