Dynamos and Herentals had a pre-match fight, over the selection of midfielder Juan Mutudza, but it was the Glamour Boys, who won on both fronts. 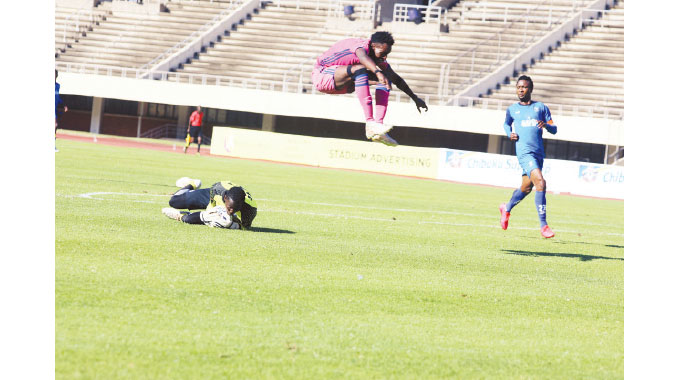 They fielded the midfielder and went on to claim a narrow win, in a Chibuku Super Cup match, at the National Sports Stadium yesterday.

Mutudza is a Herentals player, on loan to DeMbare and the students say they included a clause which prohibits the midfielder from playing against his parent club.

“‘In our loan agreement’, we have a clause that stipulates that he should not feature against Herentals.

“Surprisingly, we saw Juan being fielded by Dynamos. That was our complaint. We wanted to solve the issue amicably.

“We have done the procedures and the PSL would be informed about that as we agreed that we should take it up.”

Cameroonian Albert Eonde added to their pain, when he scored the solitary goal, which made all the difference, in this evenly-contested tie.

Herentals had Dereck Chitsanzara sent off, for a second bookable offence, moments after the restart.

“Let me say what was important was the three points that we got today,” said Dynamos coach, Tonderai Ndiraya.

“When a team is down, they tend to push forward, a little bit more.

“They throw more numbers forward so, what is important, is that our boys played well, defensively.

“But, in pushing forward, we also exposed ourselves at the back, that’s the only problem I am worried about.

“We were not really fluid, going forward, we did not take advantage of the counter attacks, which were on offer.”

Defender Emmanuel Jalai was ineligible, for the match, due to suspension.

Midfielder Ali Maliselo made a return, to the starting line-up, after missing a couple of Chibuku Super Cup matches. David Temwanjira also got a rare start but was anonymous for a big part of the game. He missed a good chance, in the 42nd minute, when he got to the end of Bill Antonio’s low cross, with keeper to beat.

“We could have been hurt, on counter attacks,” said Ndiraya. “I am not happy, those are things we need to improve on, as a team.

“We are marching toward the quarter-finals and we cannot afford to go to the knockout stage, without really being ourselves.

Teenage winger Antonio had a field day on the right flank, and delivered a couple of crosses, which his DeMbare teammates failed to convert.

Antonio thought he had put his team ahead, with a 45th minute header, but the nearside assistant referee, had his flag up for offside.

Mutudza also had his header, ruled out offside, from a freekick taken by Godknows Murwira, in the 58th minute.

Herentals had their moments and substitute Prince Chama had a good opportunity, to punish Dynamos, but he skied his effort with the ‘keeper at his mercy.

Tino Benza could have capped a good individual outing, at least, with a goal but his grounder was saved by the ’keeper, Taimon Mvula, late into the game. Herentals remain winless, in six starts.

They anchor the group with two points.