In recent months, precious lives have been lost while some unfortunate victims have suffered life-threatening injuries during violent crimes involving firearms and other dangerous weapons. 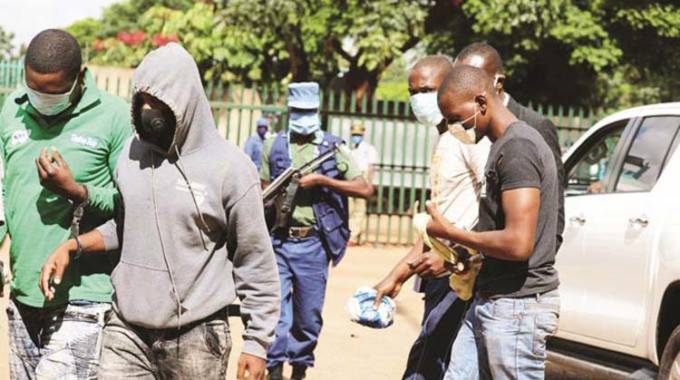 In Bulawayo, people are still to come to terms with last month’s horrific scene at Ascot Shopping Centre, where a young female employee was callously executed during a brazen robbery at the liquor store.

Between January and May this year, 477 people were convicted and jailed for armed robberies, according to statistics from the Zimbabwe Prisons and Correctional Services (ZPCS).

This represents a significant increase from 379 criminals in the same period last year.

Further, 107 have been jailed since the beginning of the year after being found in possession of unlicensed firearms.

Despite best efforts from the police in hunting down these criminals, the trend seems to be continuing.

“The figures have become disturbingly high of late. It was never the case in the previous years. There is need for stern action and combined effort to curb this vice,” said ZPCS spokesperson Superintendent Meya Khanyezi.

It is believed that most of the robberies are inside jobs, where employees, friends or even relatives work in concert with the robbers.

The insiders pass on crucial information that is handy for the criminal enterprise. There are growing instances of victims that are being robbed at traffic intersections, roundabouts and lay-bys.

“The ZRP is disturbed with the rate at which armed robberies are occurring around the country. We have intensified efforts to account for robbery syndicates who are moving around the country attacking members of the public, who include motorists, businesspeople and people walking or moving alone,” said police spokesperson Assistant Commissioner Paul Nyathi in a statement.

“. . . police warns that their (robbers) day in court will surely come, and members of the public are implored to keep on reporting all criminal activities.”

Criminologist and Bindura University of Science Education lecturer Collins Chikomba opines some of the criminal activities can be attributed to recent economic shocks.

“The upward trend in the rate of incarceration reflects on rising crime rates, particularly armed robberies and other property crimes, which should lead to calls from the public on punitive policies that are both rhetorically and substantially tougher on crime. There is a general belief in public that the rise in these types of crime(s), including corruption, was/is linked to corrupt police officials and lenient sentences,” he said.

However, crime and security expert Brian Kashangura says increased crime can be traced to the country’s porous borders.

“Most of the criminals cross borders into neighbouring countries where they buy firearms and smuggle them into the country. Also, we have individuals that illegally cross the border, learn all sorts of crimes and then return to practice it back home,” he said.

“It is sad that at present, hardly a day passes by without an armed robbery in Zimbabwe. This current trend is not normal at all. It is unprecedented; we seem to now have robbers and guns all over the place. The law needs to be strict on those who are caught offside so that we send a clear message to would-be robbers.”

Loopholes that cause hardcore criminals to abscond after getting bail, Kashangura added, have to be urgently plugged.

“Yes, we have the Constitution, but in some cases the evidence is so overwhelming . . . Such people should not be considered for bail. Society needs to be kept safe.”

Until recently, the country had managed to keep a lid on violent crime because communities have been working closely with law enforcement agents to weed out the bad apples. Police encourage communities to provide viable tip-offs.

Crime experts, however, express the need for the Government to adequately resource security agents with tools of the trade that can help to investigate and track down criminals. They also believe cross-border cooperation between law enforcement agents could help to eliminate convenient hideouts in foreign jurisdictions.

Kashangura added: “We also need cooperation between countries to contain the situation. Criminals flee from one country to another after committing crime, which makes it tough as a country to work in isolation . . .

“The issue of members of the public travelling with large sums of money is also creating problems . . . by deciding to personally handle your finances, you are merely placing yourself in danger . . . Police also need to continue raising awareness in the public, encouraging them not to keep large sums of money.”

The Government has already put armed robbers and drug dealers on notice.

At the burial of the late national hero, Father Emmanuel Ribeiro, on Monday, President Mnangagwa said criminal syndicates will be dismantled.

“ . . . gun-related crime will not be tolerated. Law enforcement agencies and the courts must work in concert to ensure that perpetrators of gun-related crimes, and drug kingpins, the supply chains and drug vendors are definitely smoked out and brought to book,” he said. The Sunday Mail

Luke-ing the Beast in the Eye: Morgan Tsvangirai’s June 27 epistle to the people of Zimbabwe