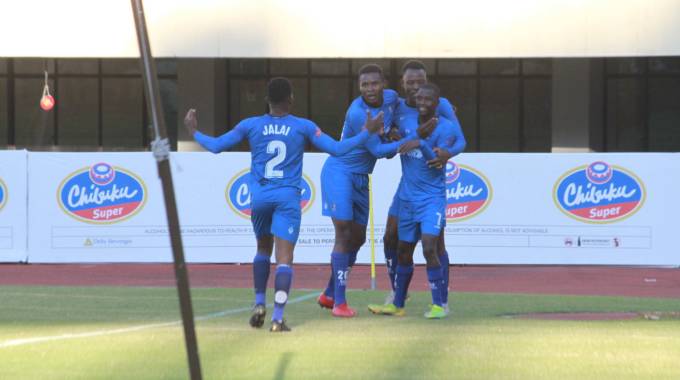 A gamble by Dynamos coach Tonderai Ndiraya to bring in an unfit King Nadolo paid dividends, as the former Highlanders forward scored the priceless goal to ensure the Harare giants cemented their position at the top of the Chibuku Super Cup Group One log standings.

Nadolo, who is still to recover from an ankle injury, came in for Barnabus Mushunje in the 53rd minute and headed in the solitary goal of the afternoon 15 minutes from time.

The win maintained Dynamos’ undefeated run in the competition and helped the Harare giants finish the first round of fixtures on top.

It came as the Blue half of the city was commemorating the fifth anniversary of the death of nine fans that perished on their way to Gweru for a league tie against Chapungu in 2016.

Ndiraya shifts focus to Manica Diamonds clash after loss to…

The club was also mourning the death of club legend and former coach David Mandigora, who passed away yesterday.

Ndiraya dedicated the victory against Harare City to both the fans and the former DeMbare midfielder.

“Before I go into the match, I would like to take this moment to recognise the ‘Famous Nine’.

“They were our loyal fans and before kick-off, we received sad news of the passing away of one of our legends, David Mandigora.

“We would like to dedicate this win to the ‘Famous Nine’ and Mandigora,” he said.

Admitting that his side’s performance was not fluid, as they literally struggled throughout the match, the Dynamos coach said what mattered most was the result.

“The performance was not fluid, but, like I said, we were not looking much into the tactics.

“We had the commemoration and the death of our legend in our minds going into this game.

“We spoke about that before the game and I am glad we managed to get a result.

“We managed to honour our fans and a true legend.”

With Dynamos still unbeaten in the first round of matches, collecting 11 points from a possible 15, Ndiraya couldn’t hide his admiration for his charges.

“We wanted to collect as many points as possible in the first round of matches,” he said.

Sitting on top of the log after the first round of games, Ndiraya is now targeting two more wins in the reverse fixtures to ensure his charges book a place in the quarter-finals.

“We are not yet safe. What we need now are two more wins to guarantee us a place in the quarter-finals,” he said.

He also heaped praise on his star player Nadolo.

The young forward proved to be a true match-winner despite his ankle injury.

He headed in a Emmanuel Jalai cross in the 75th minute.

“King Nadolo is without doubt one of our best players.

“We have been trying to manage him; he wanted to play all the games and was pushing for a place in the team, but we had to manage him.

“We had to leave him out of the team for two matches.

“It was a matter of managing his injury as he is not yet fit to start matches.

“I am happy with his contribution in today’s (yesterday) match.”

Despite finding himself on the losing end against Dynamos, Harare City coach Lloyd Chitembwe was not moved by the result.

He was full of praise for his charges.

“I think it is a natural feeling not to feel so good after a defeat,” he said.

“I wouldn’t want to evaluate my players looking at the result, but instead I would like to assess the application of the team.

“I am happy with what our players did today.”

With Harare City now having to battle it out with three other teams for a spot in the quarter-finals, Chitembwe revealed he was using the Chibuku Super Cup as preparation for the Premier League.

“What happens in the Chibuku trophy will not have any serious bearing on our targets. All competitions are important, but my focus is on the league.” The Sunday Mail

DeMbare’s Ndiraya, Antonio voted coach and player of the month for April