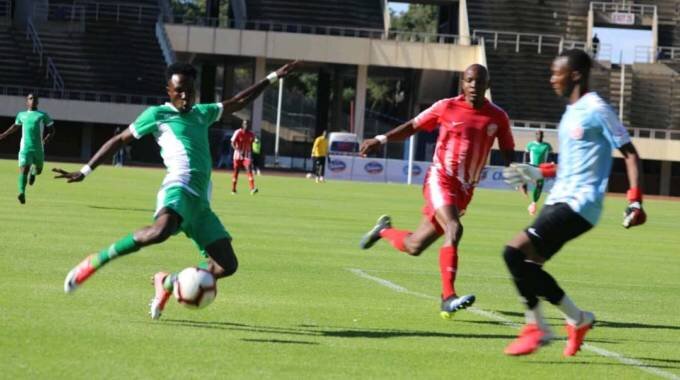 Yadah Stars insist they are in the Premiership to stay despite shaky pre-season preparations which sparked speculation they were about to fold.

The Miracle Boys underlined their intentions of being part of the top-flight this year when they held fancied CAPS United in a Chibuku Super Cup Group One match at the National Sports Stadium yesterday.

A cloud of uncertainty had hung over Yadah amid rumours their benefactor, Prophetic Healing Deliverance (PHD) founder Walter Magaya, was about to dump the football franchise.

In yesterday’s encounter, the team had the temerity to take what seemed a comfortable 2-0 lead before CAPS United rallied back to force a share of the spoils.

Yadah took a first-half lead through Prosper Kafelapanjila in the 15th minute, with Tinotenda Mutyembizi doubling their advantage three minutes before the break.

CAPS United bounced back two minutes after resumption through Ishmael Wadi, who later sealed his brace in the 69th minute.

But the spotlight had been building around the fate of Yadah, who had an uncharacteristic quiet off-season.

The team’s chairperson, Everson Chatambudza, yesterday said they had resolved to conduct their business in private.

“They are just rumours. Yadah is part of the Premiership; we have paid our affiliation fees. Everything was done in time.

“It is only that we did our preparations quietly; we are not noisy people, hence people are not aware of what we will be doing . . . you saw we will be competing for honours in the Chibuku Super Cup,” he said.

The side seemed destined for a surprise win when they led 2-0 at the break through Kafelapanjila, who tapped in a Issa Sadiki cross, before former Mushowani Stars forward Mutyembizi doubled the lead after he also came to the end of another Sadiki assist.

But they took the foot of the pedal and allowed CAPS United to creep back into the match, which left their coach Genesis Mangombe fuming.

“We lost energy in the second half of the match. It is disappointing to let go of such a lead, and this is something that you will expect the boys to come to the party and defend.

“We look forward with a positive mind; we are not going to be pushovers. What other teams are playing for is what we are also playing for,” said the gaffer.

For CAPS United coach Darlington Dodo, his team’s fight-back was something to marvel.

“The boys knew that the two-nil lead the opponents had was not worthy for them to have because we had presented them with the goals.

“We were supposed to do better but at the end of the day, I was happy with the turnaround,” said Dodo.

CAPS United had a promising start, forcing Yadah to be on the defensive.

The Miracle Boys had to rely on counter-attacks for the better part of the first half, and their probing was rewarded on the quarter-hour when Kafelapanjila tapped in a Sadiki cross from the left flank.

As they continued to rely on the counter-attacking game through which Sadiki was causing all sorts of problems for CAPS United defenders, the underdogs got their due reward.

The match seemed over for the Green Machine in the empty National Sports Stadium, but Dodo seemed to have used his half-time pep talk to rejuvenate his charges. They turned their first-half dominance in possession into goals as Wadi headed in a Phineas Bhamusi cross three minutes after the break.

The player marked his debut in style for Caps United as he squeezed in his second goal of the afternoon after some commotion in Yadah’s penalty box. The Sunday Mail