He is undoubtedly one of the best and most eccentric goalkeepers to be produced in Zimbabwe, but Brenna “Campos’’ Msiska has another interesting story to tell. 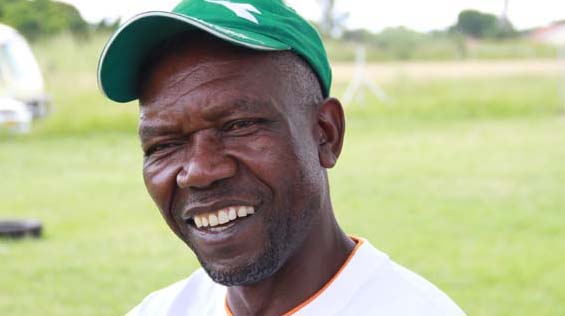 At 17, he was jailed for seven years after trying to cross into Mozambique to join ZANLA.

With the zeal and verve of a budding teenager, he nearly sacrificed his life for Zimbabwe’s freedom.

He was almost placed on death row but ended up serving four years at Chikurubi Maximum Prison before getting amnesty in 1978.

“I am an ex-detainee in my own right!” he told The Sunday Mail Sport.

Msiska, whose goalkeeping talent was already evident during his formative years in Harare’s high-density suburb of Mabvuku, was arrested in Mutare in 1975 as he and his group tried to cross into Mozambique.

“The year was 1975 and we had made up our minds with my friends to go and join the liberation struggle in Mozambique.

“Unfortunately, our group was intercepted by the Rhodesian forces and we were arrested.

“I was sentenced to seven years, two years were suspended and I served four straight years before the amnesty.

“We were almost put on death row, we were victimised, tortured until we accepted that we wanted to go and join the liberation struggle in Mozambique.”

He served a few months at Mutare Prison before he was transferred to Chikurubi, where he was incarcerated until 1978.

Msiska took his goalkeeping talent to Chikurubi Prison, where he entertained other inmates for almost four years.

Upon his release, he briefly joined Zimphos FC.

“I didn’t stay there (Zimphos) for long. Byron Manuel spotted my talent and took me to Black Aces.

“After only a week, I became Aces’ first-choice keeper,” said the 62-year-old local football legend.

When Black Aces were relegated in 1985, Msiska, who had remarkably made it onto the Soccer Stars’ calendar, did not go down with “Shaisa Mufaro”.

Instead, he sought greener pastures elsewhere.

He almost joined Dynamos before he settled for CAPS United in 1986.

His brief stint at DeMbare sowed seeds of what has blossomed into a long-time relationship with the legendary Sunday “Mhofu” Chidzambwa, who was then in charge of the Glamour Boys.

“Nothing will separate me from Mhofu. No one can divide us.”

Msiska has been Chidzambwa’s most trusted lieutenant at for both club and country.

He was the Warriors goalkeepers’ coach during Chidzambwa’s on-and-off relationship with the national team, which included stints at the Africa Cup of Nations in Tunisia (2004) and Egypt (2019).

He was also by the veteran coach’s side when he won four of the six COSAFA Cup titles.

His younger brother Misheck (2000) and Charles Mhlauri (2005) were the only other coaches to achieve that feat.

Msiska and Chidzambwa also worked together at Premier Soccer League side ZPC Kariba.

“I almost joined Dynamos in 1985. I trained with Dynamos for a month at the invitation of Sunday Chidzambwa, but then Chifokoyo (Julius), who was then a CAPS United executive, just came and took me to Makepekepe.

“That year my team Black Aces was relegated but still I made it onto the Soccer Stars calendar.

“When Mhofu came to CAPS United later on we clicked. Our relationship is almost 35-years-old.”

At CAPS United, he trained for only two weeks before wrestling the number one jersey from Duncan Ellison.

After spending 11 seasons at Makepekepe, his career was cut short by injury.

“I learnt a lot during my time in jail.

“If you want to progress in life, be someone who is easy-going – munhu wevanhu. You must be committed and dedicated in everything that you do; that is what we learnt in jail.

“If it’s time for training, take it seriously; if you are on the field of play, know that this is your job, but at the same time you have to entertain the fans.

“When we used to play, it was not all about money, it was more about passion for the game and the desire to entertain the crowd, (and) the desire to be seen by the fans in action and make them talk about you the following morning.”

What about the legend that he used to bet with former Dynamos striker Vitalis “Digital” Takawira before games?

“Yes, we would engage in verbal bets, it was all psychological. I would declare to Vitalis that nhasi iwewe haugowese. ‘Everyone else can score and not you!’

“You see, those youngsters like Vitalis were deadly in front of goal. Moses Chunga was also dangerous.

“Back then, there was also talk of juju (laughs), so this was a way of mocking them (strikers) and make them feel your presence in goals.”

He owes everything in his life to football.

“It has contributed a lot to my health, otherwise I would have been wasted by now. There are diseases and drug abuse cases ravaging our communities, but if you are in football, you escape most of these.

“I urge the current footballers to take the game seriously. Not only does football bring food on to your table, it also helps you to live a healthy life.”

Msiska is an inter-generational keeper, having played in the same league with Posani Sibanda and Musa Muzanenhamo before pitting his wits against the likes of ex-Highlanders ’keeper Peter “Captain Oxo” Nkomo, the late John Sibanda (Zimbabwe Saints), Japhet M’parutsa (Black Rhinos) and Peter “Chops” Fanwell.

He was still on top of his game when a new crop of goalkeepers, including Muzondiwa Mugadza, Ernest Chirambadare, Gift “Umbro” Muzadzi and George Mandizvidza, emerged in the early 1990s.

“Competition amongst ’keepers in Zimbabwe was very stiff in the 1980s and early 1990s. But maybe I should praise myself for being one of the best.

“I won the Vaseline Goalkeeper of the Year for three consecutive years in the 1980s and yet I didn’t make it onto the Castle Lager Soccer Star of the Year calendar, where Japhet (M’parutsa) dominated.

“Those were great keepers.”

What has he been up to?

“Because of the coronavirus, there has been no football, so I am just relaxing, doing some school runs.

“But I am still in football. I am just waiting for the phone call.

“I am still ready to return to the trenches. What was left for us, myself and Mhofu (Chidzambwa), was to take Zimbabwe to the 2022 World Cup finals.

“I believe this is Zimbabwe’s best chance of qualifying for the finals in Qatar.”

Baba Gari, as Msiska is affectionately known, has a message for Zimbabweans as the nation celebrates its 41st birthday today.

“By the way, Ba Gari is not a nickname, I actually have a son called Gari who is in Switzerland. Pamela is the first-born. I also have Taona, Brenna, Bruce, Elsie and Emmanuel.” The Sunday Mail