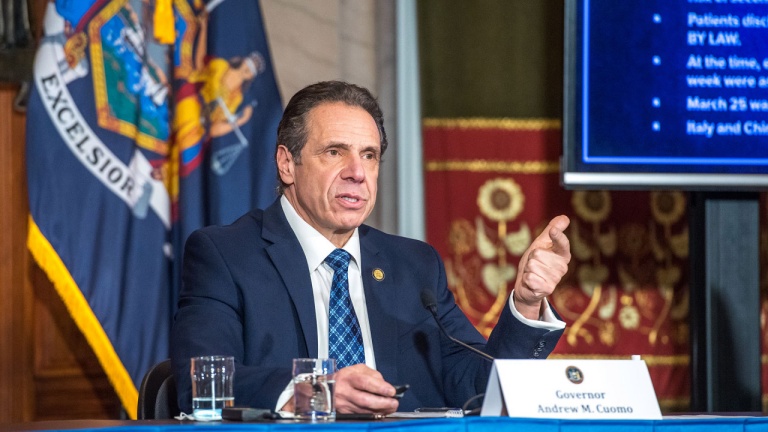 The Albany Times Union first wrote on Tuesday that a sixth woman had accused Cuomo of harassment.

But on Wednesday, it reported new details of the unnamed woman’s encounter with the governor, citing a person with “direct knowledge” of her claims.

According to the newspaper, the woman had been called to Cuomo’s governor’s mansion in Albany last year on the “apparent pretext” of helping him with a problem with his phone.

“They were alone in Cuomo’s private residence on the second floor when he closed the door and allegedly reached under her blouse and began to fondle her, according to the source,” the newspaper wrote.

The employee, who has not filed a formal complaint, also said the powerful Democratic governor touched her inappropriately on other occasions, according to the newspaper.

And the daily reported that her story first came out when she, along with other staff members, watched Cuomo give a press conference on March 3 denying earlier allegations. She became emotional before telling a female supervisor what had happened.

Cuomo, 63, denied the new allegation, which he told the newspaper was “gut-wrenching.”

He has repeatedly denied all the claims against him and said that he would await the results of an independent investigation into the allegations, overseen by the state attorney general Letitia James.

Previous accusers have referred to sexual harassment or inappropriate gestures. One former aide, Lindsey Boylan, has alleged that the governor gave her an unsolicited kiss on the lips and suggested that they play strip poker, allegations Cuomo has denied.

The new claim further weakens the position of the governor, who has been in power for 10 years and whose term expires in 2022.

Cuomo, initially praised for his state’s handling of the pandemic, has suffered a spectacular fall from grace, with Republicans and his accusers also calling for his resignation.

Republicans have begun impeachment proceedings in the state legislature, where Democrats have a majority. Its chances of success are uncertain, since impeachment requires a simple majority in the lower house and a two-thirds majority in the Senate. AFP