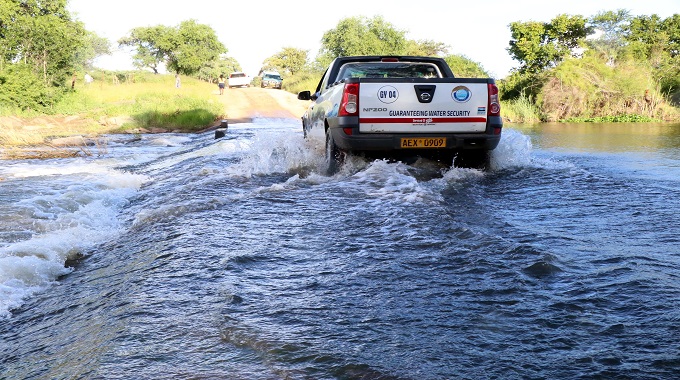 Heavy rains that have been pounding Beitbridge have left a lot of roads in the district damaged, cutting off most rural communities in the border town.

The chairperson of the district CPU, Mrs Sikhangezile Mafu-Moyo, who is also the District Development Coordinator, warned people against crossing flooded rivers or streams whether on foot or driving.

She also advised people living in low lying areas including Shashe, Tshituripasi, Tshipise and Tshikwalakwala to be on high alert for floods.

Family endures six years of fear after building house atop a…

“The rains have damaged a lot of roads, in some areas culverts and bridges have been washed away. This adversely affected the grain distribution program in most rural wards.

“We have engaged all the local roads authorities to intervene, and some say they can only get on the ground after the rainy season,” said Mrs Mafu-Moyo.

She said further assessments on the state of affairs on the roads and other key infrastructure was underway.

The official said teams were also on the ground educating communities on the risks associated with rains and to be mindful of another cycle as predicted by weather experts.

Mrs Mafu-Moyo said it was important for people to minimise unnecessary movements as per the national lockdown guidelines.

“This will help us to minimise the rate of new Covid-19 infections and the cases of drowning which are common when people enter into flooded water bodies,” she said.

In some areas, the official said the movement of grain was being postponed to allow authorities to map out alternative routes so that they may reach out to all food distribution points.

Most gravel roads under Beitbridge Municipality, especially those in the western suburbs including Dulivhadzimu and Tshitaudze have become inaccessible to motorists.

Workers from the local authority’s Engineering and Works Department were observed on the ground yesterday while fixing some of the damaged roads in Dulivhadzimu suburb around the stadium and the long-distance bus terminus.

Flooding in this area which is located in a low-lying area along the Wamlala stream has become a perennial headache for residents and the council.

Villagers from Shashe (Beitbridge west) are now using the Limpopo-Swereki road to access the town.

Its 93 km from Shashe to Beitbridge and more than 140km for those that to use an alternative route.

Those in Beitbridge East (Dite, Nuli, Tshapongwe, Tshabili, Tshituripasi and Tshikwalakwala) have to use makeshift roads to get to the urban part of the district.

It is understood that at least 200 000 people live in the district’s rural component where thousands are food insecure and are benefitting from the Government’s drought relief program.  The Chronicle.