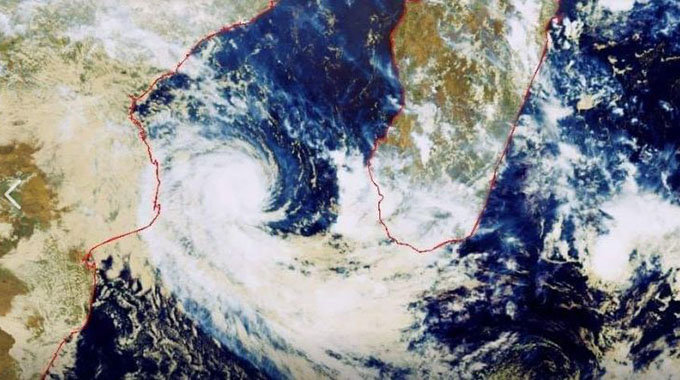 The fifth tropical storm of the season for the southwest Indian Ocean, Eloise, was yesterday starting to reach the northern tip of Madagascar and could swing down the Mozambique Channel from Thursday, reaching southern Mozambique by the weekend and then moving into Zimbabwe, but no firm forecasts are yet available.

So far the Meteorological Services Department is monitoring progress of the storm and expects it to strengthen, but will only be able to start assessing the risk to Zimbabwe from today.

MSD senior meteorologist James Ngoma said the department was monitoring developments and would advise the public on appropriate measures as forecasts firm.

Tropical storms normally intensify as they move over water, and lose energy and force as they make landfall. Like the recent Chalane, Eloise formed north of the Mascarene Islands, Mauritius and Reunion, before moving west towards northern Madagascar.

Zimbabwe needs to go on alert as severe tropical depressions and above approach, but the affected districts and the actual effects depend on the final course and intensity of the weather pattern.

At this stage in the season Zimbabwe has been enjoying above normal rains with most areas already recording more than 300mm and most farmers generally pleased with the potential of a very good season and recharging of water sources after two years of drought.

According to the mid-season rainfall analysis there was more rainfall from October 1 to December 31, 2020 than in the same three months in 2019. As in all above normal seasons, heavy storms are frequent.

“Due to the significant rainfall amounts that were recorded across most parts of the country during the first half of the season (October to December), it is important to be on watch for flood-related disasters during the second half but also take measures to conserve and store water,” said the Met Department.

While dams are filling, and a number of smaller dams have started spilling, there is still some way to go for most major dams.

The department last week advised that the country would continue to receive localised rains and moderate winds and repeated warnings that people should be prudent as there was risk of rivers rising in flood, flash floods after heavy storms, falling trees and branches, and possible collapse of huts.

“Never attempt to cross fast flowing or flooded rivers and streams whether walking or driving. Stay indoors wherever possible.

“If you urgently need to travel, take caution on the roads as roads may be slippery and contain hidden dangers covered by water, including fallen trees, utility poles and live wires,” said the MSD in a statement.

Today, there is likely to be more cloudiness with rain and outbreaks of thunderstorms across the country after a modest more sunny spell. These storms may cause localised heavier rains in excess of 30mm in provinces such as Matabeleland North, the Mashonaland provinces, Harare and northern areas of Manicaland.

People need to remember that heavy rains may have occurred upstream in river valleys, and so a river can be in flood even if it is not raining locally. The Met Department also warned that lightning remained a potential threat to human life. The Herald