The Zanu-PF leadership will deliberate on the hero status of military commander, Brigadier-General Collin Moyo (Retired) who died on Friday last week in Harare. He was 66. 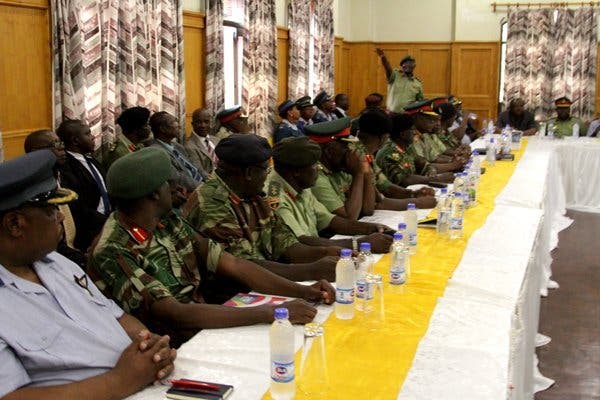 The Zanu-PF secretariat said the party would announce the burial arrangements once the deliberations have been done.

“The Politburo will deliberate on the proposed declaration of Brig-Gen Moyo as national hero. The outcome will also be announced at that level,” said the party.

Zimbabwe Defence Forces (ZDF) confirmed the passing on of Rtd Brig-Gen Moyo in a statement on Friday, who was born on July 23, 1954 in Mberengwa District under Chief Mapiravana in Midlands Province.

Rtd Brig-Gen Moyo retired from the army in 1997 and at the time of his death he was a director in the Ministry of Defence and Welfare of War Veterans responsible for Investigations, Vetting and Inspectorate.

Rtd Brig-Gen Moyo, a stalwart of the liberation war, joined the armed struggle in July 1972.

He was an accomplished instructor, and worked together with other instructors like Vice-President Constantino Chiwenga. He trained the likes of Commander Defence Forces General Philip Valerio Sibanda, Major- General Chancellor Diye, Major-General Nicholas Dube, Lieutenant-General Sibusiso Busi Moyo (Rtd), Major-General Chiramba among others.

ZDF described him as a true revolutionary and comrade who sacrificed his youth to fight for the country’s freedom.

“He committed his whole life to serving Zimbabwe and fought to defend her interests. He made valuable contributions to regional peace and security.

In July 1972, Rtd Brig-Gen Moyo joined the armed struggle in Zambia and went through Botswana.

From Botswana they were airlifted to Lusaka, Zambia, where they were met by ZIPRA leaders such as Jason Ziyaphapha Moyo, Alfred Nikita Mangena, Albert Nxele, Elliot Masengo and Ambrose Mutinhiri, who facilitated their movement to Morogoro, Tanzania for military training.

In early 1973, Rtd Brig-Gen Moyo started training with 83 others in their group.

They went through a six-month semi-commando course covering all aspects of guerrilla warfare.

Rtd Brig-Gen Moyo was instrumental in the training of more than 5 000 recruits at Morogoro training camp between 1973 and 1976. When ZIPA was formed in 1975, he was heavily involved in some joint training between ZIPRA, ZANLA and ANC cadres and his contribution was invaluable.

At Independence, the late General was attested into the Zimbabwe National Army and was attached to Headquarters 4 Infantry Brigade as a green board officer together with Air Vice Marshal Henry Muchena, the late Air Chief Marshal Perrance Shiri, Rtd Brigadier-Gen Abel Mazinyane, Lieutenant Colonel M Mpofu and Deny Murimo.

He was commissioned as a Lt-Col on 29 July 1982. He rose over the years to the rank of Brigadier-General.

Funeral arrangements are still to be finalised. The Herald