Some parts of Hwange rural particularly areas around Dete, have been without electricity for the past week after suspected copper cable thieves allegedly cut down some poles with the intention of stealing copper wires. 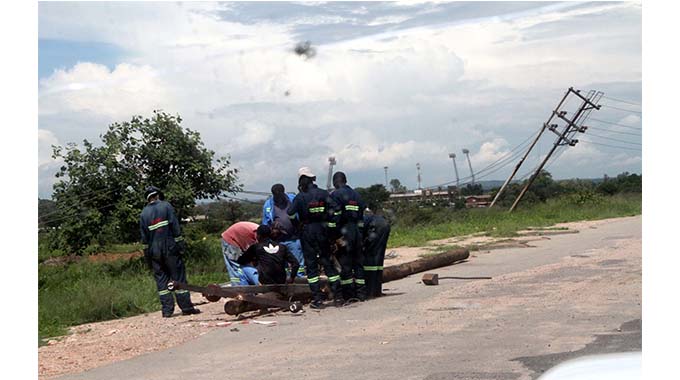 After cutting down an unspecified number of poles, the suspects allegedly did not cut the cables, probably after discovering that the wires were not made of copper, according to villagers.

Schools, clinics, shops, grinding mills and lodges are the worst affected by the blackout.

Villagers are experiencing mobile network challenges as a result.

The situation has been compounded by heavy rains that caused some poles to fall.

Zesa electricians have been literally camped in the community replacing some of the damaged lines to restore power and yesterday parts of Dete had been reconnected while other areas were still in blackout, Hwange District Development Coordinator Mr Simon Muleya told the Chronicle.

Councillor for Hwange Rural District Council’s Dete ward 15 Stanley Torima said Dete was in a dire situation because of lack of electricity.

“We had some poles that were cut down by some people, hence the blackout. We have perennial electricity problems because of technical faults but the recent incident worsened the situation. The lack of electricity has a huge negative impact especially around Dete because there are lodges and clinics as well as schools.

He urged the power utility company to use alternative electric poles to guard against vandalism and damage of gum poles by natural hazards like fire and rain.

“Besides lack of water and electricity, we have a section of Dete Compound whose houses known as Mtuya are dilapidated and the inhabitants are elderly and orphans who cannot fetch water elsewhere. That’s why we advocate for quick restoration of power so that they have water,” added Cllr Torima.

His Silewu/Chezhou counterpart Cllr Olipha Lisutu said villagers’ lives were at risk as some of the electricity cables were lying on the ground.

“We have reported the fallen cables to Zesa but we are living in fear because we don’t know if they have cut off power from the fallen cables. We wish they could have a permanent solution because these poles fall every year because of rains and termites,” she said.

It is not clear if any reports of vandalism were made to police as Matabeleland North police spokesperson Superintendent Siphiwe Makonese could not be reached on her mobile. The Chronicle