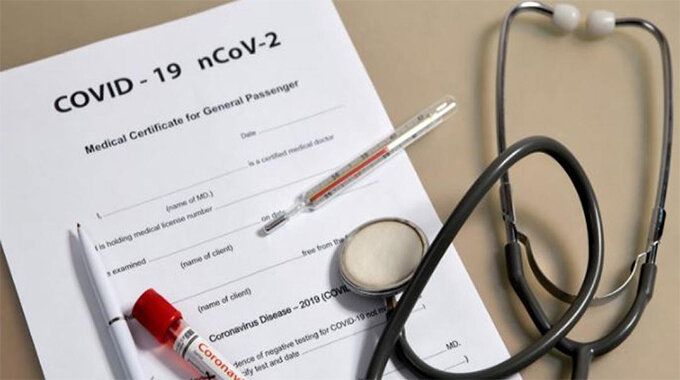 An investigation is underway after some people tried to use fake 48-hour Covid-19 certificates alledgedly issued by a Bulawayo laboratory to cross into South Africa through Beitbridge Border Post.

Zimbabwe reopened its land borders on December 1 but travellers are required to present valid Covid-19 certificates obtained within 48 hours.

Most laboratories charge around US$60 for the certificates and this has resulted in the mushrooming of scammers who are issuing fake certificates for as little as US$20.

The fake certificates have been circulating on social media.

The Chief Co-ordinator National Response to the Covid-19 Pandemic, Dr Agnes Mahomva, said yesterday that the Department of Port Health was on the lookout for travellers using fake documents.

She said the Port Health department had a verifiable list of approved testing points at various points across the country.

Dr Mahomva said investigations were ongoing and promised to give an update on progress in due course.

Responding to questions from journalists during the post-Cabinet briefing on Tuesday, Defence and War Veterans Minister Oppah Muchinguri-Kashiri, who chairs the Inter-Ministerial taskforce on Covid-19, said the Ministry of Health and Child Care is working with the police in probing the matter and it has since established that there is a laboratory in Bulawayo involved in the scam.

“Indeed, we have received reports and have also seen some videos on social media where it is alleged that there are now fake 48-hour certificates, which are being made available at Beitbridge Border Post to be specific.

Our Ministry of Health and Child Care working closely with law enforcement officers undertook an investigation on the matter and we have since established that there is a laboratory in Bulawayo involved in this,” said Minister Muchinguri-Shiri.

She said measures are being taken to bring the culprits to book. Prior to the reopening of the border, Government deployed health and security personnel to assess the state of preparedness in terms of handling travellers and issues to do with adherence to Covid-19 health guidelines.

“Delegations have been sent to investigate our preparedness and this was before December 1 and comprised of health and our security service sector to establish whether our staff was adequately well trained to make sure we will not allow those bringing in fake papers,” said Minister Muchiguri-Kashiri.

“The taskforce in Matabeleland South was adequately trained to make sure that we adhere to the WHO guidelines which indicate internationally acceptable laboratories which will be accepted in any given country.”

Minister Muchinguri-Kashiri said as a result of consultative processes, Sadc Health Ministers came up with their own guidelines including a list of acceptable laboratories for Covid-19 tests.

“We looked at this at Sadc, international and local level and we also came up with our own list. These are some of the mechanisms that we have put in place to make sure that we protect our people as much as possible. Those that would not want to adhere to these guidelines will be dealt with accordingly,” she said.

Acting Mpilo Central Hospital; chief executive officer Professor Solwayo Ngwenya said he was aware that there are claims that some of these fake certificates had the health institution stamp, but added that the certificates were not issued at the hospital.

“I have heard that people are having fake certificates but those are not officially from Mpilo. This is the work of fraudulent people who stole a copy and reproduced other copies with the same serial number,” he said.

Prof Ngwenya added that the suspects could have stolen Mpilo stamp to “authenticate” the fake certificates.

“I am sure they are stamping those fake certificates in some backyard oblivious of the fact that they are putting the nation at a grave risk,” said Prof Ngwenya.

He urged police to act swiftly as many people are bound to contract the virus if the perpetrators are let scot free.

“There is this hovering spirit of people who want to travel to and from South Africa when we all know that our neighbour is a serious Covid-19 hotspot. I encourage people to relax and not put their lives at risk in the name of fun, celebrating and partying because they will die,” said Prof Ngwenya.

Police recently arrested two people and confiscated more than 300 blank stamped Covid-19 certificates, as the net closes in on people who are making fake certificates and selling them to travellers intending to cross the borders.

The two, Simbarashe Tsetse (24) and Freddy Katamanga (31) were arrested after originating fake Covid-19 certificates for travellers at Chirundu Border Post.

They were arrested after a tip-off from members of the public leading to the recovery of 334 blank stamped Covid-19 certificates, two tubes containing glass capillaries, two testing kits, two receipt books, three plastic capillaries, Covid-19 test record register, a methylated spirit bottle and one pack of new needles at their offices at Self-Med Complex. The Chronicle