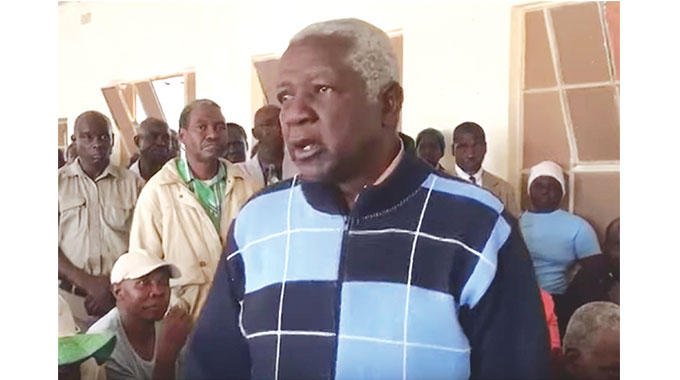 Former Gwanda Mayor Rido Mpofu has been arrested for allegedly raping his 15-year-old relative on several occasions while she was staying with him.

Mpofu (70) from Jacaranda suburb in Gwanda was not asked to plead when he appeared before Gwanda magistrate Miss Caroline Matanga facing a rape charge last week. He was remanded in custody until 23 October.

Prosecuting, Mr Noel Mandebvu said Mpofu raped the minor once sometime last year and three times this year. The court heard that Mpofu would threaten to chase the complainant away from his home or stop supporting her if she reported the matter.

“Complainant woke up and as she was receiving the shoes from the accused person, he pushed her onto the bed and raped her. Accused person went further to rape the complainant on three other occasions this year and would threaten to chase her away from his house or stop paying her school fees if she revealed the matter to anyone,” he said.

Mr Mandebvu said the complainant later revealed the matter to her grandmother sometime in August and the matter was reported to the police on 25 September. Mpofu was arrested on Wednesday last week following police investigations.

Meanwhile, a 13-year-old teenager has appeared in court for allegedly raping his 11-year-old neighbour. The teenager, who cannot be named for ethical reasons and is also a school dropout, was convicted on his own plea of guilty to rape by Gwanda regional magistrate, Mrs Sibonginkosi Mkandla last week. Passing of his sentence was postponed to this week.

Prosecuting, Mr Khumbulani Nyoni said the teenager raped the complainant who is a Grade Four pupil at Mbokodo Primary School in Filabusi, after he met her while she was on her way to school.

The complainant then reported the matter to her grandmother on 25 April,” he said.

Mr Nyoni said the complainant’s mother escorted her daughter to the police station where she reported the matter. The Sunday News