WATCH: 22 elephants dead in less than a week, ‘no conclusive results’ says Minister 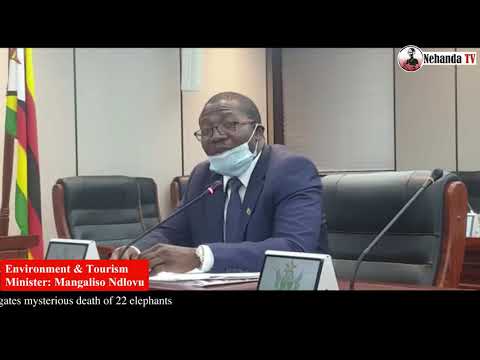 The Zimbabwe National Parks and Wildlife Management Authority remains puzzled at the deaths of 22 elephants in the Pandamasue Forests of Matabeleland North in less than a week.

ZimParks spokesperson Tinashe Farawo said most dead elephants were juveniles and they suspected the cause of death was the density of the species and lack of food due to the ongoing drought.

“Most of the elephants dying are young, and we now believe the cause of death is the density of the species. They suffer from stress and inadequate food especially this time of the year. They end up eating anything and some of the things might be poisonous,” Farawo said.

Environmental, Climate, Tourism and Hospitality Industry Minister Mangaliso Ndlovu told the media at Post Cabinet Briefing on Tuesday that there were no conclusive results of the cause of the deaths of elephants but scientists were suspecting it could be some bacteria plants.

Ndlovu ruled out claims that it could be anthrax killing elephants in Matebeleland North.

“We have got teams of scientists who have already collected samples to try and understand what could be the cause of death. What I can say so far is that anthrax has been ruled out but it will take some bit of time for them to have conclusive results on what is the real cause.

“We are working with some private specialists in the area and we do have a private specialist laboratory in Victoria Falls which we have been able to make use of. We are expecting that we should be able to get some preliminary results as early as tomorrow (yesterday Wednesday).

“They were suspecting it could be some bacteria plant but they were cautiously giving me these results because they are still running numerous tests. Currently, there are no conclusive results but we are quite worried about the development which is taking place,” Ndlovu said.