Tino Kadewere broke into tears after seeing pictures of his Lyon teammates wearing t-shirts with a message dedicated to his late brother Prince during a warm up ahead of their Manchester City clash on Saturday. 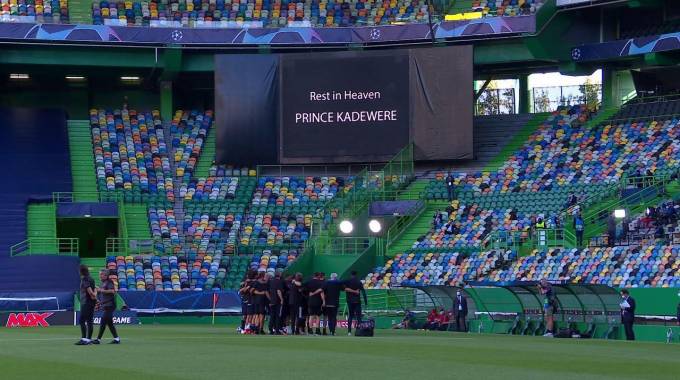 Lyon stood in solidarity with Tino, who is in the country to mourn his brother who died last Wednesday.

The French top-flight side, who went on to win the match 3-1 to proceed to the semi-finals of the UEFA Champions league, warmed up with t-shirts inscribed ‘Rest in Heaven Prince Kadewere.’

And Tino, who was waiting to watch his team, could not help but cried after seeing the pictures.

Tino desperate to play for Warriors. . . even as hopes fade…

This was revealed by his brother Prosper in an interview with H-Metro last night.

“He was shocked. He just raised his hands, held his head and cried. I could feel that he was humbled and he felt the love.

“It was a touching moment for him, it was something he didn’t expect,” said Prosper.

Prosper, known as Boss Pullo in football circles, said they saw the news that Lyon are set to pay tribute to Prince on social media after H-Metro Sport ran the story hours before the match.

He said they could not believe it and dismissed it as ‘some of those speculative stories’.

“We first the news on social media, I think you guys did the story. So I was actually with Tino when I saw it on my phone and I showed him. We just concluded it’s one of those speculative stories.

“So we just waited for the match and we were really shocked to see pictures of his Lyon teammates wearing those t-shirts. He was equally shocked and he cried,” said Prosper

“Then I saw Memphis (Depay) and Dembele (Moussa) writing on social media after the match, I also talked to Tino and you can see that the boy is relieved.

“I could tell that he is happy and he even told me that Boss Pullo we are family at Lyon,” he said. H-Metro

Lyon part of us: Kadewere family

Tino desperate to play for Warriors. . . even as hopes fade for France-based forward