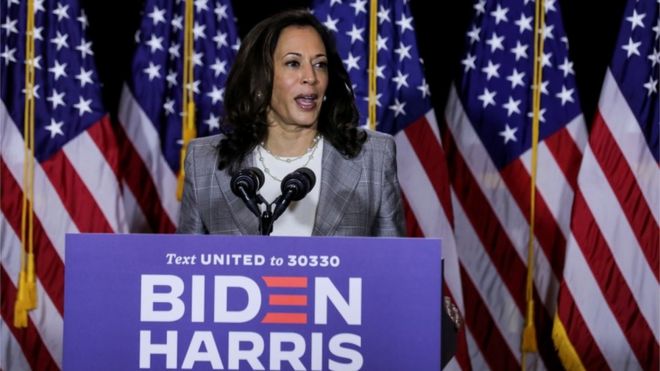 She was born in the US to a Jamaican father and Indian mother in Oakland, California, on 20 October 1964.

As such, she is eligible to serve as president or vice-president.

For years, Mr Trump promoted a false “birther” theory that ex-President Barack Obama was not born in the US.

Ms Harris, a California senator, was named on Tuesday as the first woman of colour to serve as running mate on a main-party US presidential ticket.

She is deputy to Democratic White House candidate Joe Biden, who will challenge Mr Trump, a Republican, in November’s general election.

“The VP has the same eligibility requirements as the president,” Juliet Sorensen, a law professor at Northwestern University, told the Associated Press (AP) news agency.

“Kamala Harris, she has to be a natural-born citizen, at least 35 years old, and a resident in the United States for at least 14 years. She is. That’s really the end of the inquiry.”

Anyone born in the US and subject to its jurisdiction is a natural born citizen, regardless of the citizenship of their parents, says the Cornell Legal Information Institute.

The Biden campaign sent a scathing statement in response to the president stoking the false conspiracy theory.

“Donald Trump was the national leader of the grotesque, racist birther movement with respect to President Obama and has sought to fuel racism and tear our nation apart on every single day of his presidency,” a Biden campaign spokesman said in an email.

“So it’s unsurprising, but no less abhorrent, that as Trump makes a fool of himself straining to distract the American people from the horrific toll of his failed coronavirus response that his campaign and their allies would resort to wretched, demonstrably false lies in their pathetic desperation.”

What did Trump say?
After a conservative law professor questioned Ms Harris’ eligibility based on her parents’ immigration status at the time of her birth, Mr Trump was asked about the argument at a press conference on Thursday.

The president said: “I just heard it today that she doesn’t meet the requirements and by the way the lawyer that wrote that piece is a very highly qualified, very talented lawyer.

“I have no idea if that’s right. I would have assumed the Democrats would have checked that out before she gets chosen to run for vice-president.

“But that’s a very serious, you’re saying that, they’re saying that she doesn’t qualify because she wasn’t born in this country.”

The reporter replied there was no question that Ms Harris was born in the US, simply that her parents might not have been permanent US residents at the time.

In that tweet, Mr Fitton questioned whether Ms Harris was “ineligible to be vice-president under the US constitution’s ‘citizenship clause'”.

He also shared the opinion piece published in Newsweek magazine by John Eastman, a law professor at Chapman University in California, that Mr Trump was asked about.

What is the law professor’s argument?
Prof Eastman cites Article II of the US Constitution’s wording that “no person except a natural born citizen… shall be eligible to the office of president”.

He also points out that the 14th Amendment to the constitution says “all persons born… in the United States, and subject to the jurisdiction thereof, are citizens”.

Prof Eastman’s argument, which he claims is also being made by other “commentators”, hinges on the idea that Ms Harris may not have been subject to US jurisdiction if her parents were, for example, on student visas at the time of their daughter’s birth in California.

“Her father was (and is) a Jamaican national, her mother was from India, and neither was a naturalized US citizen at the time of Harris’ birth in 1964. That, according to these commentators, makes her not a ‘natural born citizen’ – and therefore ineligible for the office of the president and, hence, ineligible for the office of the vice president.”

In 2010, Prof Eastman ran to be the Republican candidate for California attorney general. He lost to Steve Cooley, who went on to be defeated by Ms Harris, the Democratic candidate, in the general election.

Following furious backlash to the Newsweek op-ed, its editor-in-chief Nancy Cooper stood by the decision to publish, arguing on Thursday that Prof Eastman’s article had “nothing to do with racist birtherism” and was instead “focusing on a long-standing, somewhat arcane legal debate”.

“The Supreme Court has held this since the 1890s. Kamala Harris was born in the United States.”

Jessica Levinson, a professor at Loyola Law School, told AP: “Let’s just be honest about what it is: It’s just a racist trope we trot out when we have a candidate of colour whose parents were not citizens.”

How did Trump fuel the Obama ‘birther’ theory?
Back in 2011, Mr Trump began stoking right-wing theories that President Obama might have been born in Kenya.

Even when Mr Obama produced a copy of his birth certificate in April that year showing he was born in Hawaii, Mr Trump continued to claim it was a “fraud”.

Media captionDonald Trump in 2016: “Hillary Clinton… started the “birther” controversy
During a September 2016 press conference, Mr Trump, then the Republican White House candidate, was asked about the matter.

He sought to take credit for dispelling doubts over Mr Obama’s eligibility, telling reporters: “I finished it. President Obama was born in the United States. Period.”

Mr Trump also argued in 2016 that his Republican rival Ted Cruz was not eligible to run for president because he was born in Canada to a US citizen mother and a Cuban-born father. BBC News

Iran Guards vow Soleimani revenge will target only ‘those involved’