An MP has called for a “system change” after she was stopped by police while travelling in a car in east London.

Labour MP Ms Butler told BBC Breakfast she had agreed to meet local police commanders to discuss “taking the bias out of the system”.

The Met said the stop was a mistake caused by an officer incorrectly entering the car’s registration number.

Ms Butler said it had been 20 years since the Macpherson Report into the murder of Stephen Lawrence, which described the Met Police as “institutionally racist”.

“It’s about time we changed the system so it works for everyone and it’s effective,” she said.

The MP said institutional racism was “not about saying every single police officer is racist”.

“If you see black people in a car and you automatically assume that they are criminals there is a problem there,” she said.

“That’s why you have to address the system that is currently biased against black people.”

He said: “The police have made a statement saying that they made a mistake.

Ms Butler said the BMW that was stopped on Sunday was being driven by a black male friend and it was pulled over by two police cars.

She said officers said the car was registered in North Yorkshire and took the keys while checking the registration.

They then admitted there had been a mistake, that it was registered to the driver and apologised, she said.

Ms Butler told the BBC: “I still don’t know why they punched the number plate into the system.

“I don’t know what raised their suspicion. All I know is I’m black, my friend was black and he has a fairly decent car.”

In a statement the Met said “one of the occupants” had been contacted by a senior officer and they had discussed “subsequent interaction as well as feedback regarding the stop”.

It added: “We would welcome the opportunity to discuss this matter further with the occupants if they wish to do so.”

The force’s statement did not explain why the car registration was entered in the first place.

Susan Hall, Conservative leader on the London Assembly, has called for the Met Police commissioner to release body-worn camera footage from officers at the incident.

Ms Hall tweeted: “If Dawn Butler wants to play politics with police officers doing their job, Londoners should have all the facts.”

‘Listening to concerns’
Ms Butler said she had already spoken to her local borough commander and further meetings were planned.

The MP also said stop and search needed to be revised to a system with “better outcomes”, but “it’s going to take an intense amount of work”.

Ch Supt Roy Smith tweeted on Sunday to say he had spoken to Ms Butler and she had given “a very balanced account of the incident”.

The officer said the force “are listening” to concerns she had about the stop and the officers involved.

Since raising the issue Ms Butler has been subjected to racist abuse on social media.

Labour Leader Sir Keir Starmer said “it is imperative that the black community have trust and confidence in our police”.

“All allegations of racial profiling must be taken extremely seriously by the Metropolitan Police,” he added.

Sir Keir said the abuse Ms Butler had suffered on social media was “wrong and must be condemned”.

The Independent Office for Police Conduct is investigating whether officers in England and Wales racially discriminate against ethnic minority people. 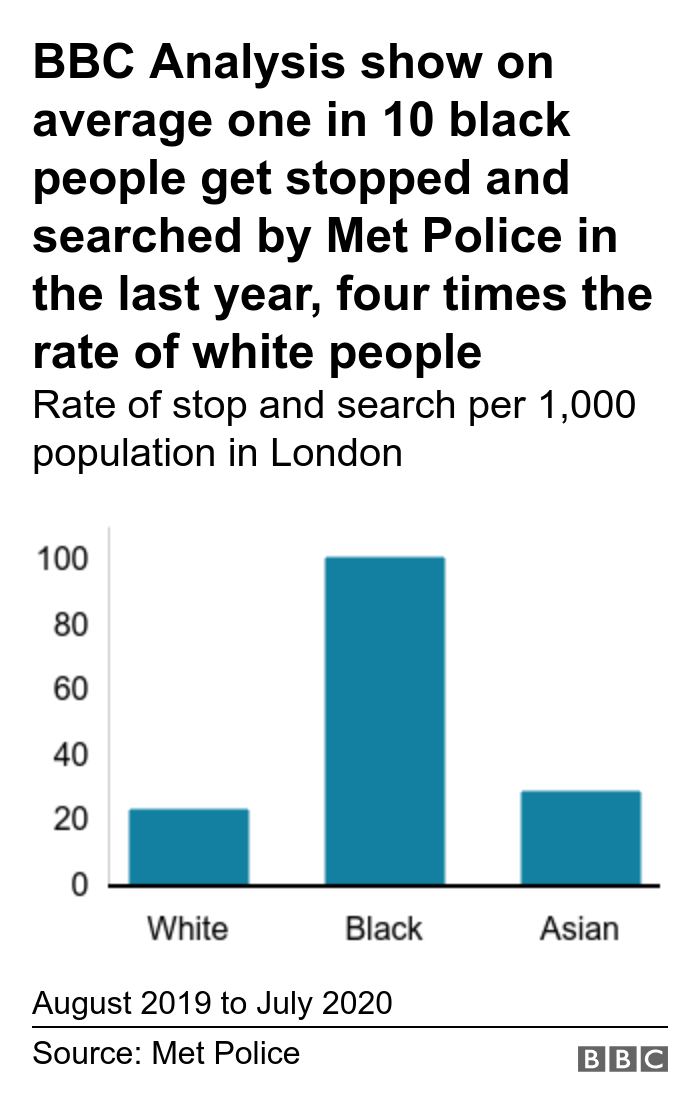 Police have the power to stop and search anyone, including stopping vehicles, if an officer has reasonable grounds to believe someone has been involved in a crime or is in possession of a prohibited item.