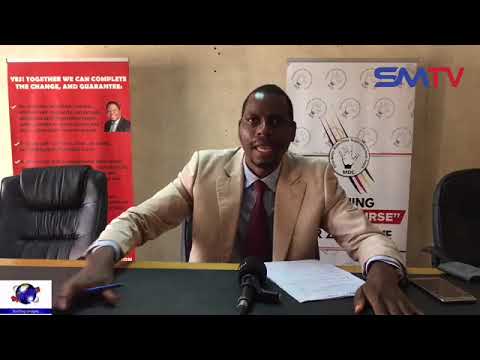 The MDC-T led by Thokozani Khupe has claimed that skirmishes with MDC Alliance youths forced them to leave the funeral of the main opposition leader Nelson Chamisa’s mother, Gogo Alice Chamisa early because it did not want to take attention away from the solemn moment in Gutu.

Gogo Chamisa passed away last week Monday at her home in Gutu and was buried at Chidyamakuni Village, Makwiriwindi area of Chiwara same week on Wednesday.

At the funeral, a mourning Chamisa had a difficult time trying to calm hundreds of agitated followers who booed NCA leader Lovemore Madhuku and MDC-T rival Thokozani Khupe and aides who had joined him to bury his late mother.

Addressing the press on Sunday, MDC-T spokesperson Khaliphani Pugeni narrated the party’s journey to Gutu and said the booing made Khupe and her followers go back early in order to avoid disturbing the mourning, since violence was likely to erupt from the agitated MDC Alliance youths.

“Madam president then instructed me to call Murisi Zwizwai to make sure that there will be no skirmishes and I must admit I did not call him until we arrived there.

“There was a security checkpoint about 100 metres before the homestead. We passed that checkpoint and obviously it would have alerted the security.

“They came to us and asked us to park somewhere while they arrange because NC (Nelson Chamisa) wanted to come and go with madam president to the tent he was.

“Unfortunately, the youths, I spoke to you about the impressionable character of the youths. So there were those skirmishes which we just thought, this will take away the attention of this most solemn moment which was happening, the burial of the mother, the grief that the family was going through and everyone there,” Pugeni said.

“At that time we made a decision and we managed to convince madam president that whilst we appreciate that NC is making all the efforts and he was very gracious.

“It was at that point that after they spoke at length with madam president, we then said to Dr Nkululeko Sibanda, tell him we wish him well and we had to leave,” he added. Nehanda Radio