The Government has suspended mobile money platforms EcoCash, One Money and Telecash among others as well as trading on the Zimbabwe Stock Exchange until further notice.

Government said the move was to curtail what it claimed was economic sabotage perpetrated by the “wolves in sheep skins amongst our populations”.

Government has accused the mobile platforms of facilitating the skyrocketing of rates in the markets.

In a statement seen by Nehanda Radio, government through the Information Ministry confirmed the development adding that the measures would subsist until the the mobile platforms are reformed.

“Government has with immediate effect undertaken a series of prudent and coordinated interventions to deal with malpractices, criminality and economic sabotage perpetuated by the wolves in sheep skins amongst our population that his Excellency the President alluded to during his official address on the occasion of heroes burial of Cde Stanely Nleya (Gagisa) at the National Shrine.

“These measures are to subsist until such time that the mobile money platforms have been reformed to their original purpose and all the phantom rate of exchange have converged into one genuine rate that is determined by the market forces under the Foreign Currency Auction System which was launched by the Reserve Bank of Zimbabwe of the 23rd June 2020,” read the statement.

Government added that the operational modalities and details of the envisaged measures are going to be announced by the relevant monetary, regulatory and law enforcement authorities in the next few days.

“Government will concurrently ensure that prudent measures are also put in place to mitigate and prevent any collateral damage that these interventions may cause to the innocent transacting public who were using these platforms.

“Government is in possession of impeccable intelligence which constitutes a prima facie case whereby the phone-based mobile money systems of Zimbabwe are conspiring, with the help of the Zimbabwe Stock Exchange, either deliberately or inadvertently, in illicit activities that are sabotaging the economy.

a) Illegal externalization of foreign currency through transfer mispricing;

b) Acting as banks outside the purpose for which they were originally licensed, as non-banking financial institutions. This includes, in the particular case of Ecocash, holding well in excess of ZWL$8 billion distributed across just over 501 000 agent/merchant lines as at 10 June 2020, which is not under the scrutiny of the Financial Intelligence Unit;

e) Ecocash, in particular, is acting as the centre pivot of the galloping black market foreign exchange rate and therefore, fuelling the incessant price hikes of goods and services that are bedevilling the economy and causing untold hardship to the people of Zimbabwe.

In this regard, it has been conspiring with big merchants to act as their conduit through which they transfer hundreds of millions of dollars per day to runners on the street who then buy US Dollars on their behalf;

f) Rampant, often arrogant, non-compliance with directives issued by the Reserve Bank of Zimbabwe and the Financial Intelligence Unit;

g) Facilitating illicit trade in notes and coins, at contrived rates of between 30% and 50%, thus causing artificial shortages of the same within the banking system;

h) Criminally allowing agent lines that were banned by the RBZ to continue trading illegally;

i) Using bulk airtime sales at discounted prices which are cross rated to phantom USD exchange rates, which further distort the Zimbabwe market and deliberately mop up US Dollars from the black market, thus forcing up the rate of exchange in a manner that has hitherto been difficult to explain for
the monetary authorities;

k) Failure to report suspicious transactions or to take action against them;

l) Creation of illegal transient and permanent money through airtime loans, unaccounted wallet-to-bank and bank-to-wallet transactions and other malpractices;

m) Maintaining auditable mobile phone lines or accounts which are being used by criminal syndicates, in connivance with insiders, to steal money from subscribers through such fraudulent practices as teeming and lading;

n) Acting as conduits for the circulation of counterfeit USD notes; and

o) Facilitating criminal activities through the non-enforcement of KYC requirements; and

“Ecocash, OneMoney, Telecash and MyCash Mobile Money platforms are all complicit in these illicit activities in varying degrees. Ecocash, however, which controls nearly 94% of all mobile money transactions, is the centre pivot of this problem and its resultant impact on Zimbabwe’s economy.

“The impact is exacerbated by the existence of fake counters on the Zimbabwe Stock Exchange, which is epitomized by the so-called Old Mutual Implied Exchange Rate (OMIR). This, in turn, results in four or more US: ZWL parallel market exchange rates operating in the market.

“At any time, therefore, there is the official rate, an Ecocash rate, an OneMoney rate, and the OMIR among others. As the RBZ Governor aptly observed recently, there are multiple contrived phantom exchange rates in use in the Zimbabwe Economy, which conspire to defeat fiscal policy, ” further read the statement. Nehanda Radio 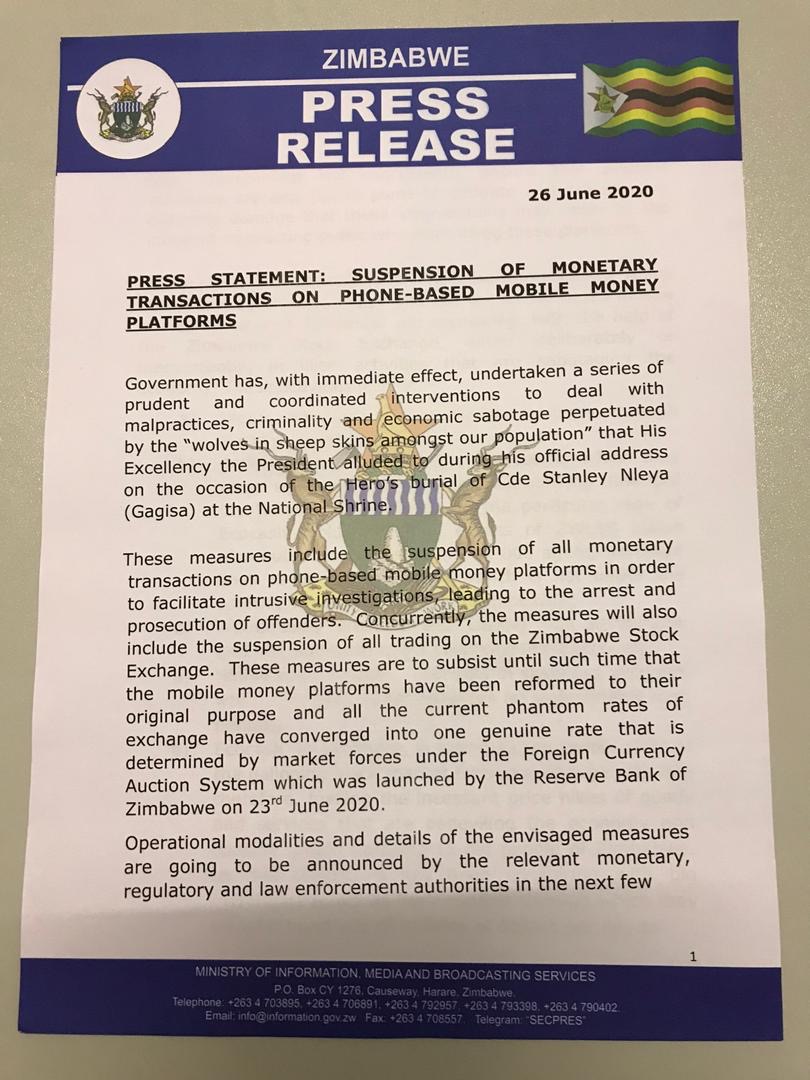 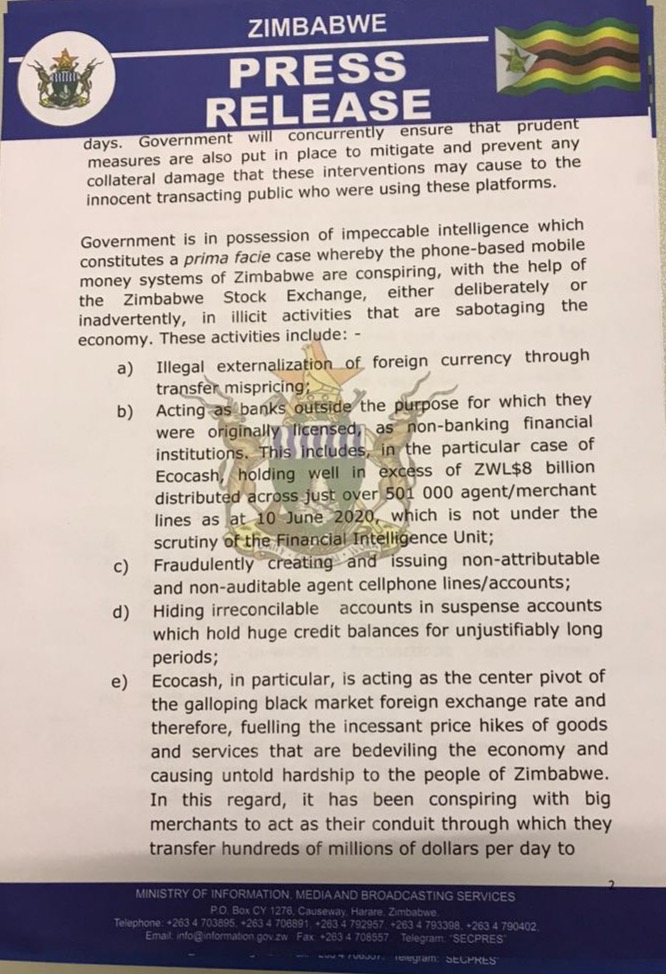 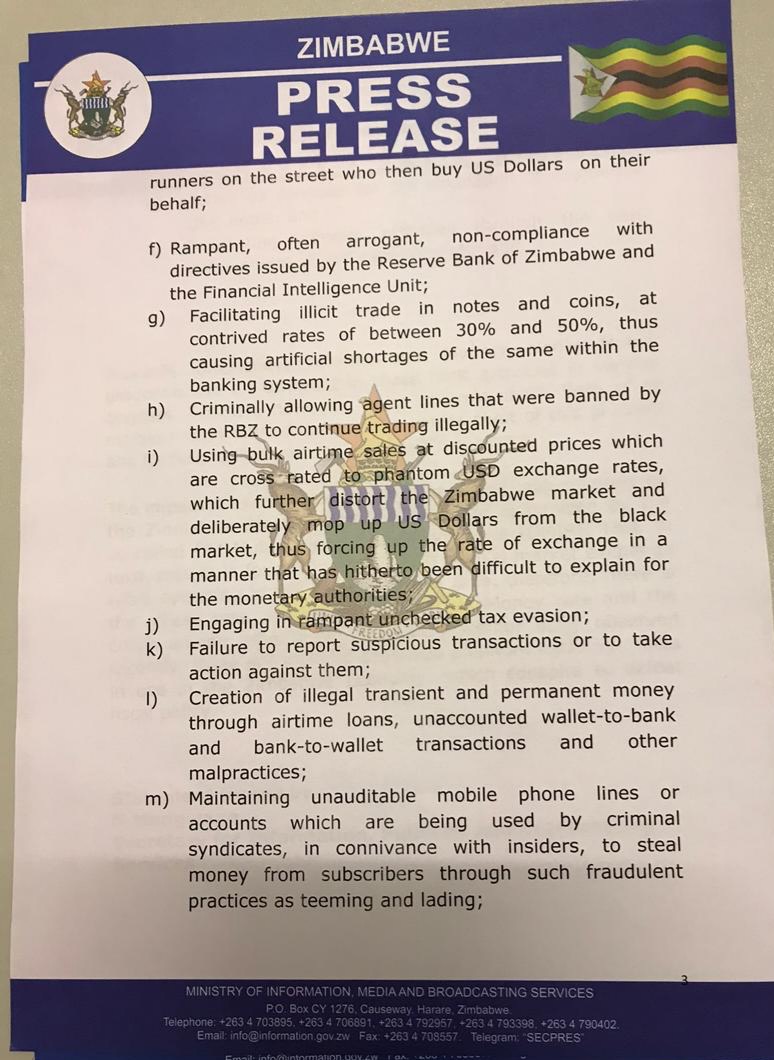 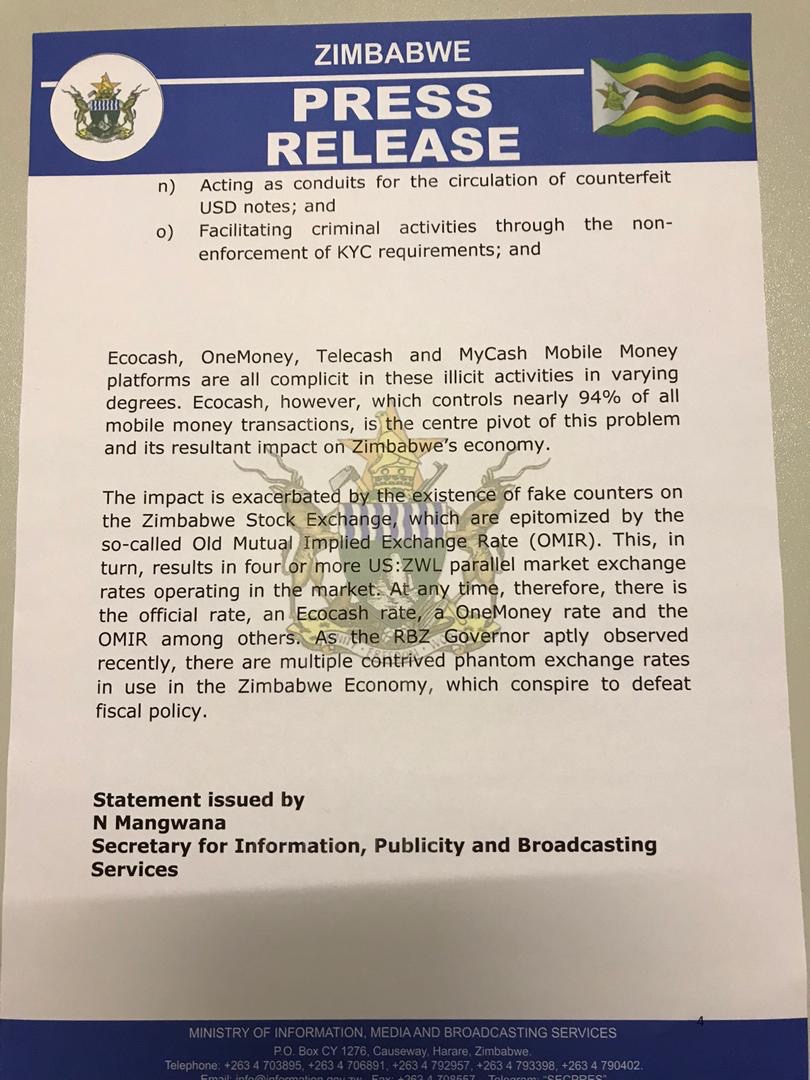 The platforms, government claims, have been used for actions tantamount to economic sabotage.

Suspension of ZBC cameraman exposes cover up of Mnangagwa-Nguwaya link