Comedienne Mai TT who returned from UK over the weekend says she is safe in private self-quarantine. 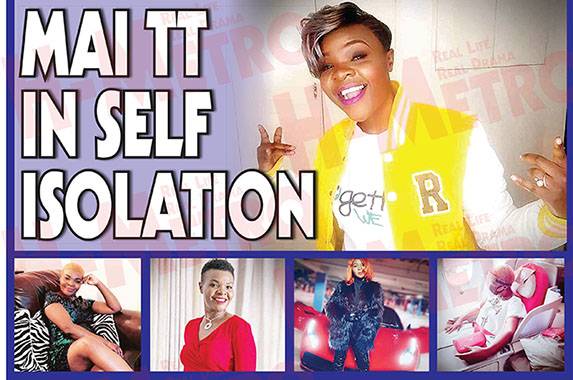 The versatile entertainer said she had missed her children and family back in Zimbabwe after she was locked up in the Queen’s land after a botched tour.

In an interview with H-Metro shortly after touching down at the Robert Gabriel Mugabe International Airport, Mai TT said home was best.

“At first it was stressful but I got used to it. Indeed I was missing home especially my kids I could even cry whilst thinking about them.

“I’m qarantined in a private place which I can’t give out a name for security reasons but very comfortable,” she said.

Mai TT who is a darling of many said she came back rich with more stuff for her fans.

“My fans should expect more fireworks now that I revisited my lost career of music but I’m back in the music industry with a bang so they should even expect life performances and shows with a full band after Covid-19.

“Musically, I collaborated with Kazz Khalif, a well-known musician from UK, Icey Stanley a hip hop guru from UK, Faybay a lady from UK as well Lamont a musician from there. I also did videos which are trending on YouTube

“I have recorded so many songs such as Letting You Go featuring Kazz Khalif, Nyarara featuring Lamont Chitepo, Ufambe Neni featuring Icey Stanley and Sugarzaddy featuring Faybay,” she said.

Although Mai TT has been away for some time, said she never abandoned her charity work as she helped many people during he Covid-19 induced lockdown.

“As I was in UK, I didn’t forget my Zimbabwe community since I was donating free clean water in almost every community.

“I donated groceries for single mother and orphans. It has always been in me to help the needy.

“I also have my soccer team of young boys called Team Mai TT. Some of them I pay their school fees and assist them,” she said.

Despite her stint in the UK where her former boyfriend Zizoe resides, she said they could not reconcile as was speculated.

“I am not getting along with that criminal, I don’t even want to hear about him and I regret knowing him and helping him since he betrayed me.

“I’m already in a new relationship, I don’t take back what I vomited so he can go hang and besides he never loved me he only wanted fame and used me as a ladder,” she said.

Mai TT also gave a good piece of advice to single mother in her similar position.

“I would like to urge them not to date young and broke men because they will destroy you since they are men on a mission which they failed to achieve on their own.”

Like most artistes who rely on numbers and public gatherings, May TT said she had several gig cancelled.

“I had several gigs in UK but because of Covid-19 everything went to zero I had to refund people and it was a loss on my side.

“However, Covid-19 will come and go just like any other disease. Even if it stays we shall be protected by the blood of Jesus,” she said.

She also thanked individuals who looked after her when she was dumbed.

“I want to thank my cousin Rose who took me after Zizoe’s family threw me out yet they are the ones who had made me to come there.

“Rose told me I can’t stay in a hotel whilst she’s there. She took me to her house and we stayed happily till I returned home.

“I also want to thank our very good friend Simba aka DJ Refkex who connected me to UK celebrities.

“’At the end of the day I did more than what Zizoe did during my stay in England.

“He is just gallivanting hopping from one woman to another and being fed by his family. He has nothing to show for his stay,” she added. H-Metro