President Emmerson Mnangagwa has pulled the trigger and fired Deputy Information Minister Energy Mutodi a few hours after he tweeted distasteful and sensational claims that abducted MDC Alliance MP Joanah Mamombe and youth leaders Cecilia Chimbiri and Nestai Marova had in fact gone out for “a romantic night to Bindura with their lovers who are artisanal miners.”

“Details emerge MDC youths Joana Mamombe, Netsai Marova & Cecilia Chimbiri went out for a romantic night to Bindura with their lovers who are artisanal miners. They parked their car at a police station for safety but tragedy struck when they demanded foreign currency for services.” 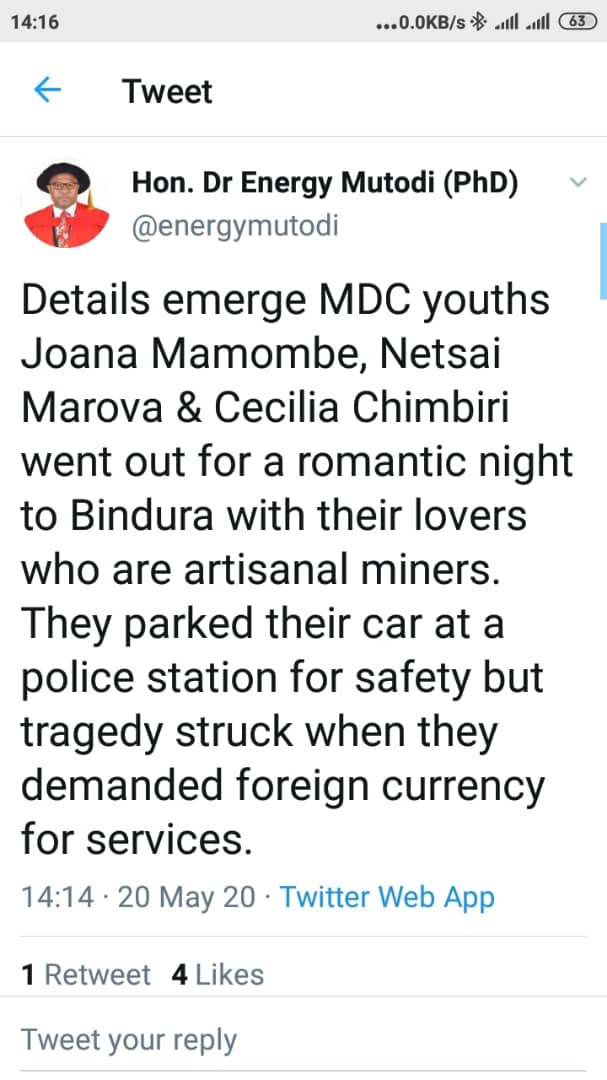 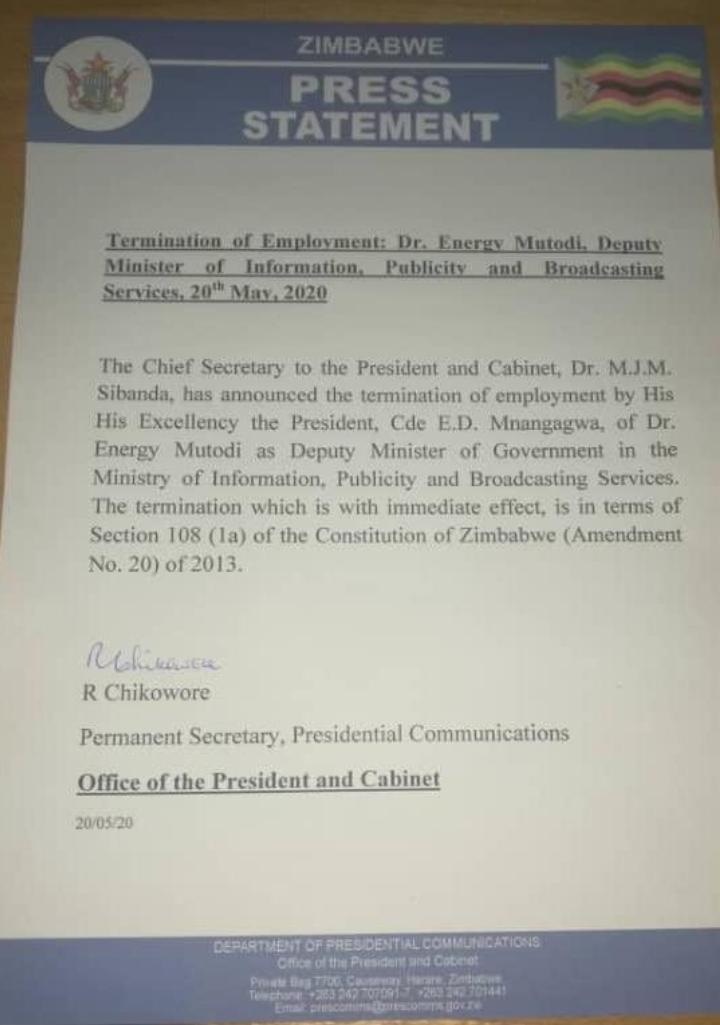 This is to confirm the authenticity of the letter in the picture. pic.twitter.com/rZNC7gUpfG

Last week a war of words erupted between Foreign Affairs minister Sibusiso Moyo and the former Rhumba musician over a diplomatic gaffe by the latter who publicly criticised Tanzanian President John Magufuli’s handling of the coronavirus outbreak in the east African country.

Mutodi accused Moyo of behaving like a Prime Minister, hours after Moyo publicly censured him on national television over his comments criticising Tanzania’s response to the deadly coronavirus.

“His Excellency John Pombe Magufuli’s Tanzania now has 630 COVID-19 cases with prayers, but without a lockdown, while His Excellency President ED Mnangagwa’s Zimbabwe only got 31 cases with a lockdown and masks. An insight into how managers can be gamechangers,” he tweeted.

“Your public statement which could have been sufficiently dealt with by a diplomatic correspondence to the Tanzanian embassy if it mattered, has divided public opinion first on the definition and meaning of government and whether you had become its prime minister in charge of the two ministries,” the unhinged Mutodi wrote.

“With due respect to your highly regarded office, I wish to remind you that our two ministries operate on a divergent yet complementary role, with your Foreign Affairs ministry outward looking, while my ministry is inward.

“While my ministry is worried about the public perception on the national leadership, its image, electability and the public approval ratings of the President, your ministry focuses on foreign and diplomatic engagement, otherwise the two ministries should have been merged if they serve the same purpose,” Mutodi added defiantly.

Mutodi also claimed that Moyo and Christopher Mutsvangwa, husband to his boss in the ministry, Monica, wanted to kill him. “Living in fear of the Chris Mutsvangwa-SB Moyo coalition. I hope it won’t resort to wartime tactics. Appealing for prayers,” Mutodi tweeted.

The week before Mutodi had attacked his boss, Monica Mutsvangwa, who is Chris Mustwangwa’s wife, accusing her of working with her husband to abuse the State media.