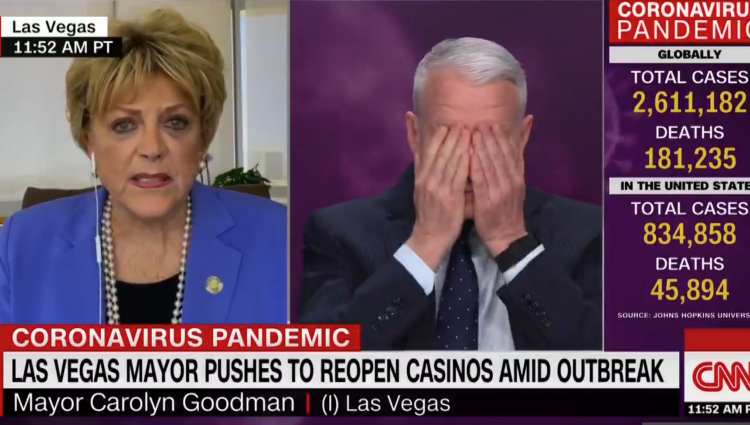 “Dear Las @Vegas. It would appear that your @mayoroflasvegas Carolyn Goodman is dangerously misguided. I am not easily shocked anymore, but the interview she is doing with @andersoncooper @cnn right now is bonkers,” Kimmel tweeted shortly after the segment aired. He went on to say that she “should resign before lunch arrives today,” adding, “She is an embarrassment to my hometown.”

As it turned out, he was just getting started.

Covid-19 no longer a “city disease” as it hits…

Kimmel, who grew up in Las Vegas and has spoke passionately in the past about his relationship to that city, spent the bulk of his late-night monologue from home on Wednesday going after Goodman for trying to reopen her city against expert medical advice.

“As ridiculous as this president is, he’s not alone,” the host said of Trump. “He got a run for his money today from the mayor of Las Vegas who—well, let’s put it this way. R. Kelly was watching the interview and said, ‘This woman is nuts.’”

“Mayor Carolyn Goodman revealed her lunacy to Anderson Cooper and the whole country today,” Kimmel told viewers before playing a series of clips from the long interview. “If you watch that back, you can see the moment that Anderson’s soul leaves his body,” he added.

“Somehow, she was elected last year with more than 80 percent of the vote in Las Vegas,” Kimmel said. “And I can see why. Mayor Goodman has a lot of thoughts and the one thing those thoughts have in common is that none of them make sense.”

After playing the section of the interview in which Goodman explicitly offered her residents as a “control group” and then seconds later denied making that offer, Kimmel said, “Somehow Las Vegas elected every lady you’ve ever seen at a Baywatch slot machine to be their mayor.”