Jaure badly injured but out of danger

Dynamos captain, Partson Jaure, who suffered severe injuries in a car crash in the early hours of yesterday, is out of danger after scans revealed he suffered no serious internal head injuries.

Jaure suffered severe injuries all over his body after he was involved in an accident when he lost control of his car near Prince Edward School in Harare.

The defender was rushed to Parirenyatwa Group of Hospitals unconscious and with a heavily-bandaged head.

There were fears about the extent of the injuries but the defender was diagnosed with a depressed skull after a full CT scan yesterday.

He also had bad facial injuries.

Dynamos team doctor Robert Musara, told The Herald yesterday Jaure was later taken for an x-ray to determine if he could have had suffered spinal injuries.

The the results showed he was fine.

He also had no fractured limbs. 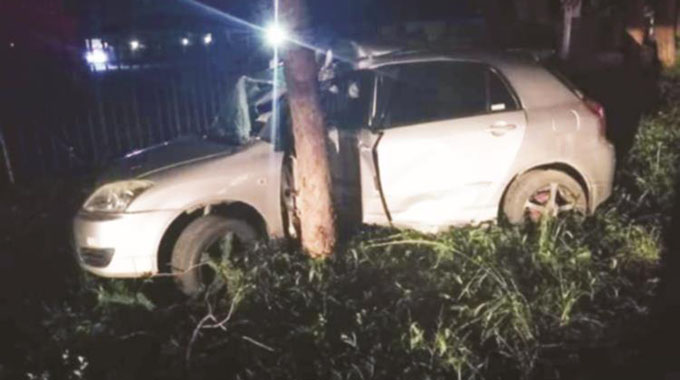 “X-rays have also been done and there are no cracks on his spine and it’s again an encouraging thing.

“Gradually, he is regaining consciousness and we expect more positive developments as from tomorrow (today) since the doctors are busy attending to him.

“The skull fracture is not as serious as previously feared. It might take a bit of time for him to recover but it’s something that we expect he will eventually overcome.

“We hope for the best and we will hear more from the doctors that are attending to him,” said Musara.

Jaure was still in the resuscitation rooms when The Herald visited the hospital yesterday. He was expected to be admitted in the private wards at the hospital later yesterday.

In a show of solidarity, the whole Dynamos executive, led by Isaiah Mupfurutsa and members of the technical team, spent the better part of the day at Parirenyatwa rendering their assistance and support to the Jaure family for the treatment of their skipper.

His friends, who featured in pictures doing rounds on social media moments before the accident, also visited him but they could not see him as people were not allowed in.

The pictures showed them drinking at one of the city’s night spots.

Mupfurutsa said they were relieved by the preliminary results from the tests conducted by the doctors.

“We just thank God that he is in a stable condition. I think, from the preliminary checks that have been done so far, he is out of danger. A CT scan was done on his head and again the preliminary results are showing that he doesn’t have serious internal injuries.

“But, he has got some facial injuries which might also have probably affected the facial bones.

“The doctors are still doing their work and he has been receiving attention. I am sure he will be admitted into a private ward and we are confident he will receive good service and attention.

“We stand by the Jaure family and just urge all the stakeholders, including the Dynamos supporters and football family in Zimbabwe, to be calm and pray for our captain.

“We hope and we are confident that he will recover soon,” said Mupfurutsa.

The Harare giants chairman also said Jaure had medical aid cover under his employment contract which will help in settling his bills.

DeMbare have also made a commitment to cover all the shortfalls.

“Jaure is employed by Dynamos and, just like any other employee, the club will take care of it. Mind you, they also have a medical aid cover which comes through his employment by Dynamos.

“As a league, we also have a sponsorship from Fidelity Life cover in terms of medical aid. We will use all that but, obviously given the challenges in the economy, where there are some shortfalls the club will take over from there,” said Mupfurutsa.

Jaure was alone in the vehicle on his way home when the car veered off the road in the early hours of yesterday.

He had just dropped off a close friend in Warren Park after a night out with colleagues at a city joint.

The defender had just made a return to the Glamour Boys after stints with local and regional teams. He was appointed captain last week, replacing veteran Edward Sadomba who hung his boots at the end of the 2019 season.

March has proved to be a bad month for Zimbabwean footballers and coaches.

According to a press statement released by CAPS United, Zvirekwi who was admitted at Parirenyatwa, was said to be in a stable but critical condition.

The statement read: “We would like to sadly advise the nation, the sporting fraternity and all our valued stakeholders that our captain, Hardlife Zvirekwi was involved in a serious accident early this morning and we thank God he survived though with severe injuries.

“His condition is critical, and the extent of injuries and implication on his playing career will be confirmed in due course after some medical examinations. Hardlife Zvirekwi is currently hospitalised and receiving treatment.”

His arm was later amputated.

Three CAPS United players — Blessing Makunike, Gary Mashoko and Shingi Arlon died when the car they were travelling in crashed against a rail, on a bridge, and burst into a fireball along the Harare-Bulawayo highway.

They were coming from a league match in Bulawayo.

CAPS United championship-winning coach, Steve Kwashi, suffered severe injuries when truck he was travelling in veered off the road and struck a tree along the Bulawayo-Harare road while returning from a Premiership match against Hwange at the colliery. The Herald