Football authorities have urged the law enforcement agents to investigate the violent incidents during the Castle Challenge Cup between Highlanders and FC Platinum at Barbourfields on Saturday and bring the hooligans to book. 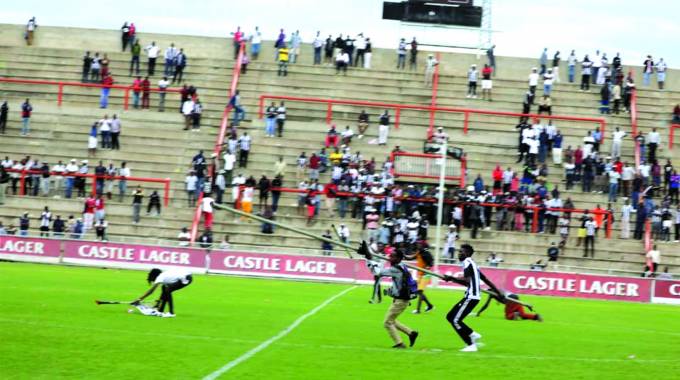 The domestic league, which is set to swing into full action any time this month, suffered bad publicity in the curtain-raiser Castle Challenge Cup after a section of unruly Bosso fans caused ugly scenes towards the end of the match.

The hooligans went on rampage, just before the final whistle, as they could not swallow the pain of losing at home after Silas Songani had put the defending champions on the path to victory with two first half goals.

The match was streamed live by the Castle Lager Premiership and Zimpapers Television Network and was watched by people from as far afield as Europe and North Africa.

Both ZIFA and the Premiers Soccer League, who are the custodians of domestic football, yesterday strongly condemned the violent incidents.

“Our position has always been that ZIFA takes great exception to any form of violence and hooliganism at any football event,” said ZIFA spokesperson, Xolisani Gwesela.

“Football is a family sport and has always celebrated the ethos of peace, brotherhood, friendship and tranquillity.

“We urge the clubs and the law enforcement agents to investigate the incident and bring the perpetrators to book.

“We also appeal to the Premiership clubs to educate their fans that in football, whatever result that comes your way, you should be able to accept with grace.

“If we don’t nip this problem in the bud, then there is a danger we will scare away both the fans and the sponsors who are the most important stakeholders. So, we don’t condone any form of hooliganism.”

FC Platinum won the match 2-0 to seal a hat-trick of wins in both the league championship and the Castle Challenge Cup.

But the hooligans clad in Bosso regalia, most of whom were caught on camera, hurled missiles and invaded the pitch as they went on rampage, targeting the visiting FC Platinum supporters and the security details. PSL spokesperson, Kudzai Bare, condemned the behaviour of the rowdy group.

Barbourfields is undergoing renovations as Zimbabwe battle to get the ban imposed on the facility by CAF lifted.

The rowdy supporters also vandalised the irrigation pipes in the stadium and disrupted the refurbishment work being carried out at Barbourfields. The Herald

I’ll be back: De Jongh