Eviction mission goes wrong for Messenger of Court in Chitungwiza

Former workers and their families at Water Vlei Farm along Seke Road in Chitungwiza yesterday attacked staff of the Messenger of Court as they enforced an eviction order.

They said the farm previously belonged to a sand quarrying syndicate called Supersands, whose owners allowed them to stay on the land.

The white owners left the farm during the Land Reform Programme in 2000, but left the workers in the compound.

According to witnesses, the Messenger of Court forced entry into houses by breaking locks using a bolt cutter and dumped possessions and furniture along Seke Road, leaving more than 50 families stranded.

The farm is now owned by Mrs Tambudzai Kachepa, who said she inherited it from her father, Mr Dickson Kachepa, who bought it in 1984 and had all the title deeds.

Mrs Kachepa said the residents were given ample time to pack their belongings in 2017 but had resisted moving on at least two previous occasions.

The eviction became violent when the Messenger of Court dumped goods and property on the side of the road, as is standard practice. The former workers were then barred from entering their “homes”.

“We didn’t resist eviction but it’s only that we haven’t been given ample time to pack our things and go. Can you imagine how difficult things are nowadays? Where can we go? We don’t have money even to transport our belongings,” said Mrs Chakoroma. 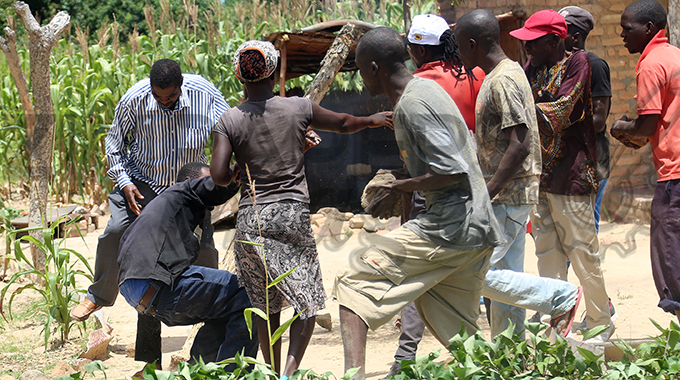 Octogenarian Mr Moyo Faraki (96) stood motionless resting his knuckles on his waist as he gazed at his few belongings strewn by the roadside.

Residents of Watervlei Farm in Chitungwiza charge towards the Messenger of Court staff as they resist eviction from their dwellings yesterday. – Picture: Believe Nyakudjara

Mr Sylvester Mamhovha had no kind words for the court emissaries’ conduct. “We are not happy with the way these people executed the evictions. They have destroyed our goods. We are now counting our losses,” said Mr Mamhovha.

Another resident, Mr Shadreck Jasi, said he had lost his national identity card and his children’s birth certificates during the eviction. The Herald

Spotlight on Nakamba as Foxes are quarantined