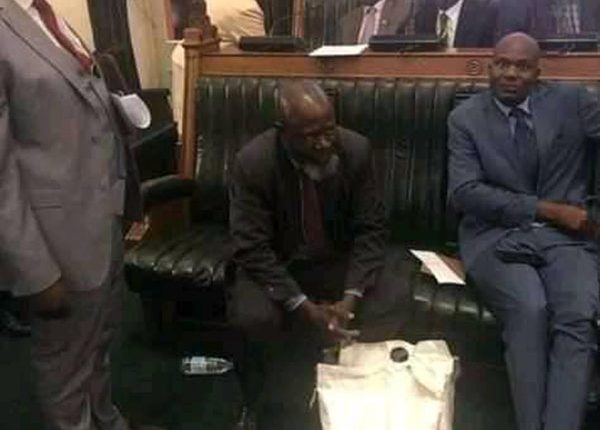 The controversial legislator told parliamentarians that he decided to name his company after his father Buruwayo adding it was not a deliberate misspelling of Bulawayo.

“My father is called Buruwayo, and I’ve branded the mealie-meal as Buruwayo. Bulawayo is spelt differently, so my company is called Buruwayo Milling Company, it is producing Buruwayo Roller Meal and I have brought to this House samples,” Chinotimba said.

Chinotimba under-fire over leaked video of him hammering…

“Just write that I don’t listen to…

Chinotimba told MPs that he had decided to assist his constituents with the maize meal amid its shortage countrywide.

The three bags of maize meal were sample gifts to the Parliament.

Nevertheless, the Deputy Speaker Tsitsi Gezi, told Chinotimba he was wrong to bring maize meal into the debating chamber.

“It’s true Honourable Chinotimba that we are all aware that mealie-meal is now a hard commodity to come by, but you should have gone to the Speaker’s office as well as the respective people’s offices that you have given this mealie-meal and not bringing it to this House.

“We’re so grateful that you’ve given us mealie-meal but in future, please take it to the respective people’s offices,” Gezi said.

Justice Minister Ziyambi Ziyambi welcomed the move by Chinotimba, but he was interrupted by Mabvuku-Tafara MP James Chidakwa who said Chinotimba was setting a bad precedent in the National Assembly.

“By the same token, I’m into the business of selling cellphones, so in future when I bring my phones here and give one to you, you should allow me to do so because precedence has been set by allowing Honourable Chinotimba to bring his mealie-meal into the chamber and distributing it to you and the others,” Chidakwa said. Nehanda Radio

Chinotimba under-fire over leaked video of him hammering Mnangagwa

“Just write that I don’t listen to Mnangagwa,” Job Sikhala on SONA