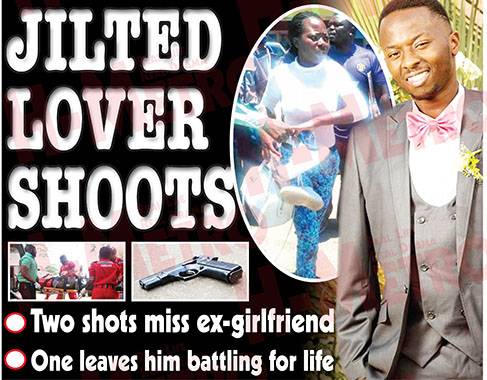 A Harare man was Wednesday afternoon battling for life after shooting himself over a girlfriend, who had ditched him.

Joyful Junior Chimanga, 27, believed to be a car dealer shot himself under the chin after his first two shots missed his lover Loraite Magombedze, 22, at Newlands Shopping Centre yesterday.

She had called him early in the morning, telling him she had decided to end their relationship.

Chimanga reportedly told his friend that he wanted to take his Mercedes Benz for washing and drove to Newlands where he took Loraite before driving along Connaught Avenue where the incident took place.

Police recovered a Noringo Pistol and three used cartridges at the scene.

Chimanga was reported to have run after Loraite and fired two shots that missed her before turning the gun on himself.

An witness, who was first to get to an injured Chimanga, told H-Metro that the jilted lover asked him to lock his vehicle since there was a lot of money inside.

“I heard two gun shots and the screaming of the lady and, out of fear, I closed the gate. I later opened the gate and saw Chimanga battling for his life and got to the scene,” he said.

He added that, on being told that there was money in the car, he feared Chimanga might have been involved in an armed robbery attempt, which would implicate him if he got to the car.

Loraite, who was still in shock, disclosed that Chimanga pointed a gun at her during an altercation forcing her to open the door and flee.

She claimed that problems started last Saturday when she went to his home where he locked her inside, forcing her to spend the night with him there.

“I have been in love with Chimanga since April last year and I lost affection with him on Saturday when I slept at his house in St Martins.

“He locked the doors for me and I slept there. My parents were angry with me and ordered me to return to his house since he is known.

“I had lost affection in him and decided to go and stay with my friends. That is why I phoned him this morning (yesterday) ndichimuramba saka haanakufara nazvo.

“We had an altercation in the car and he pointed a gun at me and I forced the door open and ran away.

Amid the chaos, there were claims that Loraite’s brother is the one who ordered her to return to Chimanga after learning that she had slept over at his house.

He arrived at the scene where some of Loraite’s friends shouted at him for causing yesterday’s mishap. H-Metro