A Chinese tourist has died in France after contracting the new coronavirus – the first fatality from the disease outside Asia.

The victim was an 80-year-old man from China’s Hubei province, according to French Health Minister Agnès Buzyn.

He arrived in France on 16 January and was placed in quarantine in hospital in Paris on 25 January, she said.

Only three deaths had previously been reported outside mainland China – in Hong Kong, the Philippines and Japan.

However, 1,523 people have died from the virus within China, mostly in Hubei where it first emerged. These include 143 deaths newly reported on Saturday by the country’s national health commission.

A further 2,641 people have been newly confirmed as infected, bringing China’s total cases to 66,492.

But China’s Foreign Minister Wang Yi said on Saturday that the outbreak in Hubei was now being managed more effectively – “indicating that overall the epidemic is controllable”.

Speaking at a security conference in Germany, Mr Wang said the number of people who had recovered reached more than 8,000 on Friday.

At the same meeting, the head of the World Health Organization said all countries should be prepared for the arrival of the virus,

What has happened in France?

In late January, France became the first European country to confirm cases of the virus. It has had 11 confirmed cases of the disease, officially called Covid-19. Six people remain in hospital.

The deceased man had been in a critical condition in the Bichat hospital in northern Paris, the health minister said. He died of a lung infection due to the coronavirus.

The man’s 50-year-old daughter is among the six in hospital with the virus, but she is recovering, Ms Buzyn said.

The other five are British nationals who caught the virus at a chalet in the ski resort of Contamines-Montjoie.

How are other countries affected?

Outside mainland China, there have been more than 500 cases in 26 countries. 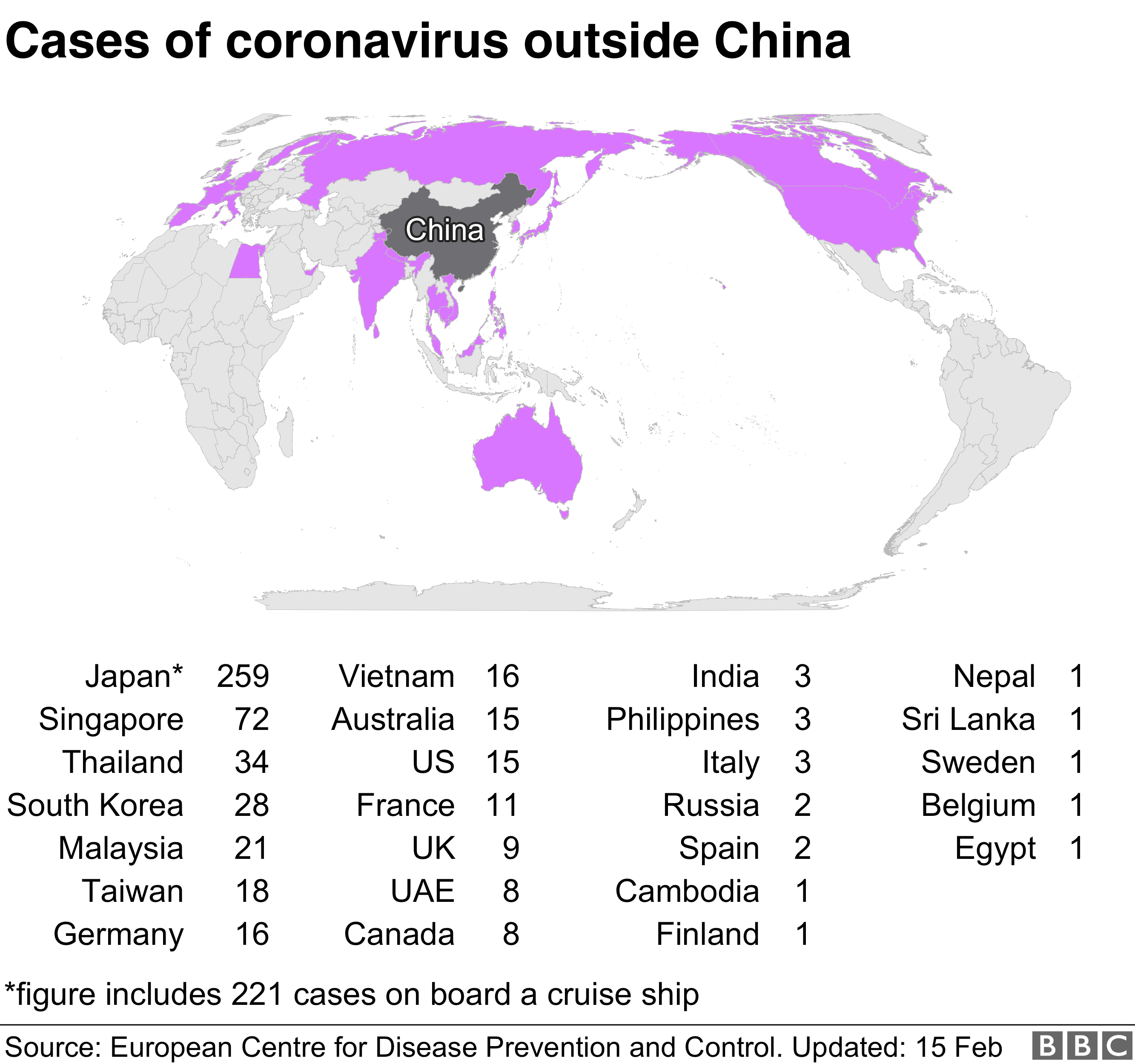 Earlier, the US said it was sending a plane to Japan to evacuate Americans stuck on the Diamond Princess cruise ship, which is being held in quarantine in a Japanese port.

Some 400 US citizens are reported to be on the vessel, according to Japan’s NHK broadcaster. Those with symptoms are expected to be treated in Japan.

Out of 3,700 people on board, 218 have tested positive for the virus. Australia also said it was considering removing its citizens from the ship.

In another development, an 83-year-old American woman on a cruise ship which docked in Cambodia, has tested positive for the virus after arriving by air in Malaysia.

The MS Westerdam had been turned away by five destinations, including the US island of Guam, before Cambodia agreed it could land.

The woman and her husband were among 145 passengers from the ship who flew to Malaysia after it docked. Both showed symptoms, but he tested negative, the Malaysian health authorities say.

No cases were found on board the ship during regular health checks on the 1,455 passengers and 802 crew.

Egypt’s health ministry on Friday confirmed the first case of the coronavirus in Africa. The ministry described the person as a foreigner, but did not disclose their nationality.

In the UK, all but one of nine people being treated have been discharged from hospital.

Five new cases have been confirmed in Singapore, bringing the total there to 72. Eighteen have fully recovered and have left hospital.

How is China coping?

Despite the spread of the virus, Chinese Foreign Minister Wang Yi said on Saturday that the outbreak in China was now “generally under control”.

The foreign minister said outside Hubei province the number of new infections had fallen for 11 consecutive days. He said there had also been a rapid increase in the number of people who had recovered.

However, new figures released on Friday revealed the toll on medical staff in the country. Six health workers have died and 1,716 have been infected since the outbreak, officials said.

Local authorities have struggled to provide protective equipment such as respiratory masks, goggles and protective suits to hospitals in Hubei.

Meanwhile, Beijing has ordered everyone returning to the city to go into quarantine for 14 days or risk punishment.

The World Health Organization (WHO) is beginning an investigation in China this weekend into the outbreak.

What has the WHO chief been saying?

Director General Tedros Adhanom Ghebreyesus made a plea for international solidarity at a conference in Germany and warned that all countries should be prepared for the arrival of the virus.

“Relatively little” was spent on preparedness for a virus outbreak, he said, compared with preparations for a possible terrorist attack.

“This is frankly difficult to understand and dangerously short-sighted,” he told an audience at the Munich Security Conference.

Mr Gebreyesus said the outbreak was still an emergency for China and he was concerned about the continued rise in cases.

But he rejected criticism of China’s efforts to combat the outbreak, saying this was not the time for recriminations or politicisation.

And he called on governments and social media companies such as Facebook and Google to help counter fake news about the epidemic. “We’re fighting an ‘infodemic’,” he said. BBC News

Mali violence: At least 30 killed in spate of violence

HS2: UK in talks with China over construction of high-speed line

‘Riot to the Rescue’: Zimbabwe turns water cannon on coronavirus