Helicopter was in ‘fantastic condition’

Kobe Bryant’s helicopter was a Sikorsky S-76B model built in 1991, which experts have compared to a “limousine”. 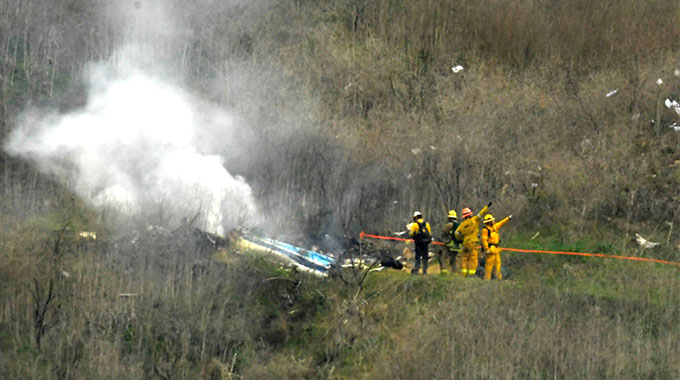 According to flight records, the aircraft had completed an eight-minute journey to pick up passengers less than half an hour before embarking on its final trip.

Investigators say the helicopter has a black box and will be examining its maintenance records and those of the owner and operator.

The aircraft in question, with the tail number N72EX, was owned by Island Express Holding Corp, which is based in Fillmore, California.

According to the website Hellis.com, it was previously owned and operated by the State of Illinois. Former pilot Kurt Deetz, who said he had flown Bryant in the very helicopter which crashed yesterday, said it was in “fantastic condition”.

Speaking to the LA Times, he said the owners had a “very good maintenance programme”.

“The likelihood of a catastrophic twin engine failure on that aircraft — it just doesn’t happen,’’ he said, suggesting that poor weather conditions may have caused the crash.

Comparing the helicopter to a Cadillac, Deetz said the S-76B was a “limo-esque’’ model which was regarded by celebrity passengers as superior to its sister model, the S-76A.

Bryant was a frequent passenger in the helicopter, using it to fly to Lakers home games.

Justin Green, an aviation attorney in New York who flew helicopters in the Marine Corps, said pilots can become disoriented in low visibility, losing track of which direction is up. Green said a pilot flying an S-76 would be instrument-rated, meaning that person could fly the helicopter without relying on visual cues from outside. Sikorsky began manufacturing the helicopters in 1977 and boasts that the $13 million model has “more than 7,4 million hours of safe, successful flight”.

However, it has previously been involved in fatal crashes in Canada, Turkey, Estonia and the North Sea.

LOS ANGELES. — A helicopter crash just north west of here on Sunday, which killed Kobe Bryant — an American icon whose cultural impact went far beyond the NBA — has plunged the world into mourning.

His 13-year-old daughter Gianna and seven other people were killed in that crash.
Bryant was 41.

He leaves behind his widow Vanessa and three daughters — Natalia (17), Bianka (3), and Capri (seven months).

Israeli Prime Minister Benjamin Netanyahu, Kareem Abdul Jabbar, Trevor Noah and Tom Brady were some of those who sent their messages of condolences.

“Kobe Bryant, despite being one of the truly great basketball players of all time, was just getting started in life,” Trump wrote.

“He loved his family so much, and had such strong passion for the future. The loss of his beautiful daughter, Gianna, makes this moment even more devastating.”

“Kobe Bryant was a giant who inspired, amazed and thrilled people everywhere with his incomparable skill on the court — and awed us with his intellect and humility as a father, husband, creative genius, and ambassador for the game he loved,” Mayor Eric Garcetti said in a statement.

“He will live forever in the heart of Los Angeles, and will be remembered through the ages as one of our greatest heroes.”

Those who knew him best grappled with how to express the shock of the loss.

“To have been such, particularly when he was young, to be a part of his life and to watch his career grow, watch him grow, this is one of the most tragic days of my life,” Jerry West, who as general manager of the Lakers first signed Bryant in 1996, told The Times.

“I know somewhere along the way I guess I’ll come to grips with it . . .This is going to take a long time for me.”

Magic Johnson told KCBS’ Jim Hill: “It’s just amazing that we were blessed to have a chance to know him, but also to see him play. But to me, his greatest joy was really after basketball, was being a husband and a father and being a coach of his daughter’s basketball team.

“The city needs heroes, Jim. We need our heroes to be here. And this is not a good day for the City of Los Angeles because we needed Kobe to still be around our kids who idolised him, the fan base who idolised him.”

Shaquille O’Neal, who led the Lakers to three championships with Bryant, tweeted that he was “SICK.” “There’s no words to express the pain im going through with this tragedy of (losing) my niece Gigi & my brother @kobebryant I love u and u will be missed.”

With Bryant as shooting guard and O’Neal as centre, the Lakers won three consecutive NBA championships — in 2000, 2001 and 2002.

But he bickered with O’Neal, who was ultimately traded, possibly costing the team additional titles.
He still racked up records, and scored 81 points against Toronto on January 22, 2006 — second in NBA history only to the 100 scored by Wilt Chamberlain in a 1962 game.

The Lakers returned to form in 2009, with Bryant leading the team to championships that year and the next and securing his legacy as one of the sport’s best ever.

He was an All-Star 18 times, second most in NBA history, and was the fourth highest all-time scorer with 33,643 points — surpassed for third place the night before his death by LeBron James.

“Continuing to move the game forward @KingJames.” Bryant wrote in his final tweet. “Much respect my brother.”

The news brought a massive crowd to the Staples Centre, where Bryant led the Los Angeles Lakers to five NBA titles.

Crews continued to scour the crash scene yesterday, while officials said it could take as long as a week to collect all of the evidence.

The retired NBA star was killed after his personal helicopter crashed into a steep hillside on Sunday morning, killing everyone on board.

Bryant, his daughter and seven other people, were on their way to his Mamba Cup tournament, a boys and girls youth basketball league he founded after he retired.

Bryant was to coach his daughter Gianna’s team.

The victims were identified as Orange Coast College baseball coach John Altobelli, his wife Keri and daughter Alyssa, Sarah Chester and her daughter Payton, who was a teammate of Gianna Bryant’s, and the pilot, Ara Zobayan, along with the girls’ assistant coach Christina Mauser.

Paramedics, arriving by helicopter, searched the area, but found no survivors.

Bryant, who had homes in Newport Beach and Los Angeles, was known to keep a chartered helicopter at Orange County’s John Wayne Airport.

A Sikorsky S-76 helicopter, built in 1991, departed John Wayne at 9.06am, according to publicly available flight records.

The National Transportation Safety Board database shows no prior incidents or accidents for the mid-size helicopter.

They cried in bars and churches, on street corners and golf courses and basketball courts.
Restaurants closed on Sunday night to honour his memory, and people placed basketballs outside their front doors, like flags at halfmast.

Bryant’s death also cast a pall over preparations for the Grammys.
Crews worked quickly to place Bryant’s rafter jerseys — Nos 8 and 24 — side by side, illuminated by floodlights.

Bryant’s fame and popularity spanned many cultures and locales — from Los Angeles to Italy, where he grew up, to Philadelphia, where he went to high school, to China, where he was beloved.

On the Chinese social media platform Weibo, “Kobe dies” shot to the top of trending posts, along with a hashtag “Can we restart 2020?”

The Lakers were the first NBA team to broadcast in Korean, in 2013, prompting crowds in Seoul and Los Angeles to swarm karaoke bars and restaurants to catch Kobe in action — and to learn more about the sport through the intimacy of their native language.

“He’s one of these athletes that transcend race and nationality,” recalled Alex Kim (47), a public relations executive in LA.

“The fact that the team participated in outreach to our community only made them more popular.” — Los Angeles Times/CBS.