Soccer stars that never were

When the legendary Japhet “Short Cat” Mparutsa decided to hand over the special award he received from Delta Beverages to Joseph Zulu, the gesture received plaudits across social media forums. 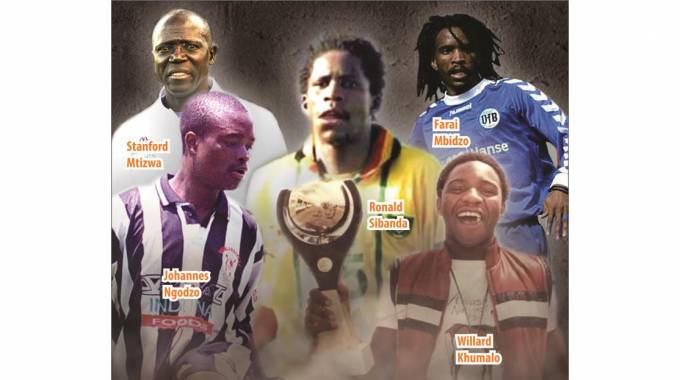 Mparutsa, the first keeper to win the Castle Lager Soccer Star of the Year award in 1982, was one of the past winners of the 50-year-old award who were remembered as part of the Golden Jubilee celebrations held in Harare on December 6.

The former Dynamos and Black Rhinos goalie, who now runs the Japhet Mparutsa ShortCat Foundation from the United Kingdom, passed on his medal to Zulu — the former Rio Tinto star he described as “the one deserving the most”.

Despite holding a special record of having graced the Soccer Star of the Year calendar on 10 occasions — in the 1970s and 1980s — Zulu never won the top gong.

There are a number of former greats like Zulu, who were also unfortunate not to win the Soccer Star of the Year award, despite possessing immense talent that continues to be the talk of the football fraternity years after they retired from the game.

John Phiri, Usman Misi, Edelbert Dinha, David Mwanza and Joel Shambo are also some of the players who were unlucky and never won the award.

It also remains a mystery how the likes of Vitalis “Digital” Takawira, Ronald “Gidiza” Sibanda, Farai Mbidzo and Johannes “Signature” Ngodzo failed to lay their hands on the coveted Soccer Star of the Year trophy that is currently the property of Caps United midfielder Joel Ngodzo (pictured left).

Back in the day, Zulu was a crafty midfielder who even attracted interest from Manchester United. However, he failed to honour the invite after Rio Tinto reportedly threw spanners onto the deal.

“Back then, it was so difficult to come up with a winner because the performances were breathtaking. There wasn’t any gap between the 11 winners.

“One of the 11 could have been the winner. So players who come to mind are Shaw “Kojak”Handriade of Dynamos, a midfield workhorse. I think he could have won it anytime in the 70s.

“There was Max Tshuma of Zimbabwe Saints, who I think his misfortune was in playing in the same era as the Mastermind, George Shaya. He was the first runner-up to Shaya on at least three occasions,” said Mabika.

“There was also David Muchineripi of Chibuku Shumba and Black Aces, he could have easily won it. There was also Joel “Jubilee” Shambo, he was so unlucky.

“You can talk of Stanford “Stix” Mtizwa, Adam and Madinda Ndlovu. There was another goalkeeper from Dynamos, Matthew Mwale, he was a very good goalie, it’s only that he played during the same period as Mparutsa.

“These are just a few names, but there are many who could have won this prestigious award.

“Nowadays, to call a spade a spade, it’s not easy to match the standards that were set by the likes of George Shaya, Moses Chunga, David Mandigora, Stanley Ndunduma, Stanford “Stix” Mtizwa and company.

“Yes, today’s youngsters do try, they commit themselves but it’s now difficult to come up with the best.

“However, most people are in agreement that for this year, Joel Ngodzo deserved it.

“Ralph Kawondera, his runner- up, could also have easily beaten Ngodzo. Some people believe that Ralph Kawondera should have won the award,” said Mabika.

Dynamos legend and 1986 Soccer Star of the Year Moses Chunga thinks Boy “The Menace” Ndlovu, a slippery winger who tormented defenders during his days at Eagles, could have easily won the 1986 gong.

“There were a number of players who challenged me in 1986 but there was Boy Ndlovu, a very good player. He could have won it,” said Chunga.

“There was stiff competition, I feel proud to have rubbed shoulders with such players. There was Willard Kumalo and Stanford Mtizwa, the list is endless. There were great players back then. It’s sad that the standards have gone down very much,” said Chunga.

Former DeMbare dribbling wizard Takawira looked well poised to win the 1992 award but was controversially disqualified on the eve for indiscipline.

Informed sources say Takawira was punished for driving away with former Warriors manager Jimmy “Daddy” Finch’s car without his permission.

The 1992 award eventually went to Wilfred Mugeyi, who had top scored for champions Black Aces.

Stewart “Shutto” Murisa, the 1996 Soccer Star of the Year winner who also played for The Big Three — Dynamos, Highlanders and CAPS United — during an eventful career, felt that Takawira’s name should have been mentioned when Delta Beverages honoured the past winners.

“Digital was a master dribbler, a very gifted player who should have been rewarded with at least one Soccer Star of the Year award,” said Murisa.

“However, of all the players, I think that Stanford ‘Stix’ Mtizwa deserved more than one gong,” added Murisa.

“You also wonder how a player like Gidiza (Ronald Sibanda), who rocked the scene in the late 1990s and early 2000s, failed to win this award.

“Then there is Johannes Ngodzo, one of the finest players to come out of Highlanders. He was on top of his game between 2001 and 2003 but still failed to make it. That shows you the level of competition back then,” Murisa said. Sunday Mail