. . . power switched on whilst working

An operational boob by Zimbabwe Electricity Transmission and Distribution Company on Tuesday saw its employee being electrocuted while operating on a power line. 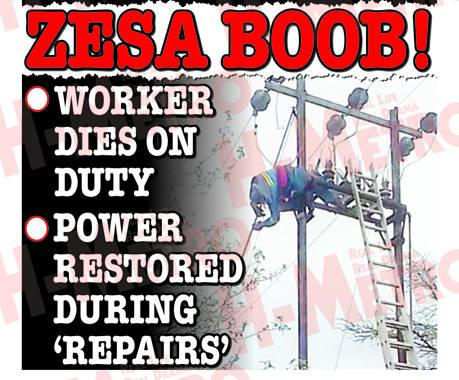 The man, who could not be identified yesterday, was electrocuted in Battlefields in Kadoma on Tuesday evening when power was restored while workers were still doing maintenance work.

Police National Spokesperson Assistant Commissioner Paul Nyathi said they were investigating the incident but could not divulge the name of the deceased.

“We are investigating a case in Battlefield whereby a ZESA employee was allegedly electrocuted whilst trying to fix a fault.

“Police will reveal his identity immediately after his next of kin are informed,” he said.

ZESA spokesperson Fullard Gwasira could not immediately comment on the accident saying internal investigations were still going on. H-Metro