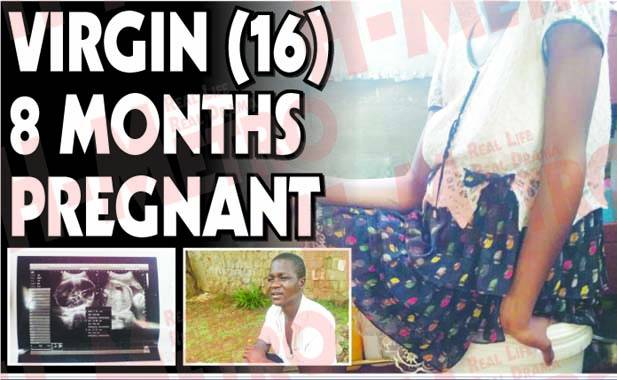 An eight months pregnant Mufakose girl (16) has been confirmed a virgin.

Medical reports from Harare Hospital and a private hospital confirmed that the girl is now eight months pregnant and there is a medical affidavit which confirmed she is still a virgin.

In an interview with H-Metro, the girl (name withheld) who is due around December 25 said there was no penetration during the act by the alleged father to be, Blessing Nyagomo, 25.

“I pushed him away before he penetrated because I didn’t want to have sex and at that time my sister’s seven-year-old son also budged into the room I had been dragged into.”

Renewed virginity just a stitch away

The minor has since dropped out of school and doctors said it was possible that one could get pregnant whilst a virgin.

A local gynecologist who spoke to H-Metro said the condition is possible but not common.

“Theoretically, it is possible that this can happen but it’s also not common as it depends with various factors of the apparatus of an individual and this is a generalised view,” he said.

“It is not a miracle that such thing has happened, sometimes there could be a slight penetration or even that semen flows without penetration but there should be a tear in order for it to pass through.”

Sister to the minor, who is now the guardian, claims the gynecologists are set to conduct a caesarean section in order to preserve the virginity.

The sister said they went to various doctors and support groups who had been assisting them with the issue but the gynecologists said caesarean will be best in order to keep the girl’s virginity intact.

“About the caesarean section, it’s a matter of her being a minor. She might not be able to push a baby that’s why there is need to conduct a caesarean,” the doctor said.

“Our father passed on and I’m here at this rented place taking care of my sister as well as my son,” said the sister.

The minor, who is a form three pupil, said she had since dropped out of school since she can longer conceal her pregnancy and is yet to register at a maternity centre.

“I was doing form three and no one at the school knows that I am eight months pregnant but some of my class mates are suspicious.

“I tried wearing my school uniform but it longer fits because of the big belly and so I just decided not to go,” she said.

The alleged father to be claims he had sexual intercourse with the minor three times but was not sure if he penetrated.

“I know I’m not in a position to be a father but I’m ready to take care of the baby but her parents are proving to be difficult since they don’t want me near her.

“The child has nothing to do with whatever issues that we had with the mother’s side but I am ready and I’ll do whatever it takes to be there for my child,” said the man. H-Metro

Renewed virginity just a stitch away