A Rusape dealer who operates a bulky grocery-shop at the main bus terminus has set tongues wagging after some pictures of him kissing and cuddling a married woman went viral on social media. 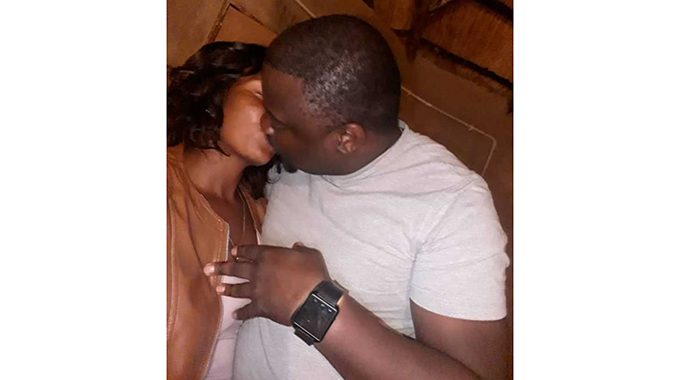 Simbarashe Mupoperi was allegedly dating Ivene Dube (24), despite being fully aware that she was customarily married to Tawanda Mutungwe.

Mupoperi’s involvement with Ivene was busted last week when Mutungwe scrolled through her mobile phone picture gallery and got more than he had bargained for.

He bumped into the lovebirds’ intimate pictures, much to his chagrin.

Mutungwe allegedly interrogated his wife and she admitted dating the unscrupulous dealer.

Mutungwe approached Ivene’s parents and surrendered her back to them in the presence of Mupoperi.

When contacted for comment, Mupoperi denied having a sexual relationship with the married woman.

He weirdly claimed that Ivene was related to his wife and the pictures, in which they were kissing and cuddling, were taken at family function.

“Yes it is me and her (Ivene) in those pictures. The pictures were not taken in a lodge, but at a family function. She is my wife’s relative. Go ahead and write whatever you want, you are free. Pressure zero, zero pressure,” said Mupoperi before abruptly cutting off the phone call.

Though repeated efforts to get a comment from Ivene were fruitless as her mobile number was constantly unreachable, her husband confirmed the allegations.

He said he felt betrayed by the pair’s uncouth actions.

“I got my wife’s phone and perused through her picture gallery, and was shocked to see her pictures kissing, cuddling and caressing Mupoperi. I confronted and dragged Mupoperi to Ivene’s father and then surrendered her back to her parents in his presence. I told Ivene’s father that Mupoperi was his new son-in-law.

“Mupoperi rents a shop from my brother at Vengere market and that is where I suspect he got connected to my wife. Mupoperi would pounce on my wife when I am away in Tanzania to collect his cars. They would have sex in lodges dotted around the town,” said Mutungwe. ManicaPost